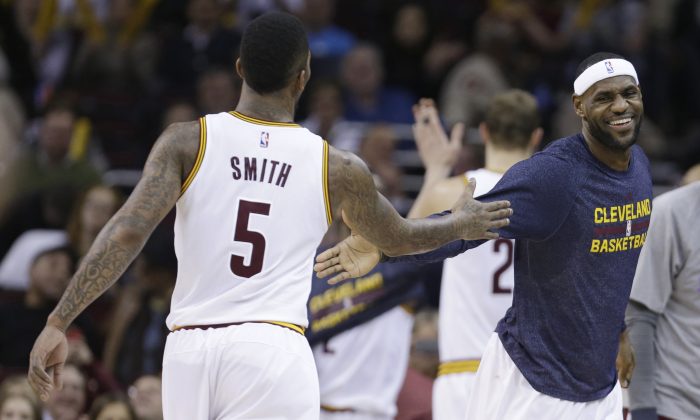 10 Best Lineups in the NBA So Far This Season

The Cleveland Cavaliers strong play lately has been mostly due to their acquisitions at the trade deadline, with their current starting lineup featuring J.R. Smith and Timofey Mozgov outscoring opponents by 26.9 points per 100 possessions.

Other lineups around the league have also been enormously successful, though not always culminating in a great record due to injuries.

Check out the top lineups in the league so far this season below, with a minimum of 249 minutes played together.

Despite incorporating two new players into the starting lineup, the Cavs have reeled off 19 wins in their last 23 games.

Golden State has the second-best record in the league, due in large part to a stellar starting lineup.

Sacramento fell out of playoff contention early despite fielding a strong starting lineup, mostly due to injuries and a weak bench.

Already punishing opposing teams, this offensive-minded starting five could be even better thanks to Jordan’s explosion while Griffin’s been out.

Injuries have prevented this lineup from seeing much time so far this season, but Oklahoma City could easily beat whichever team they face in the playoffs.

This is the first lineup above the minimum where one of the players has been traded. Unfortunately for Dallas, they haven’t quite captured the same magic with Rajon Rondo in place of Nelson, though several lineups with smaller sample sizes–such as J.J. Barea in place of Nelson–have done well.

Houston hopes to see everyone healthy for the playoffs, with Howard missing much of the season with injuries.

Another Western Conference starting lineup, and despite Batum’s struggles this season.

Washington hasn’t been the same since the first part of the season, but the starting lineup has been pretty good when healthy.

The vaunted lineup that led to four All-Star selections has helped Atlanta snag the top seed in the East, and be the first team in the league to lock up a playoff spot.