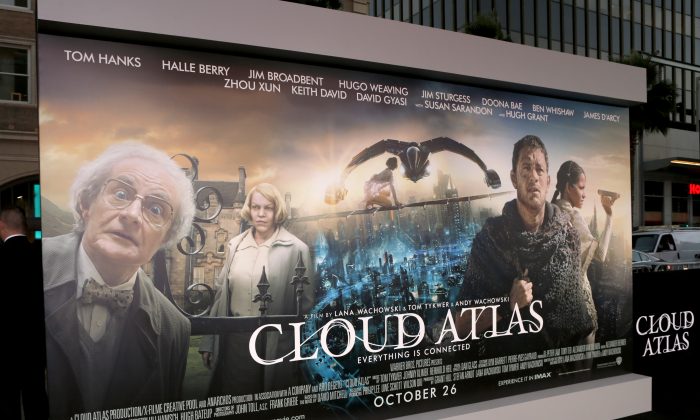 Movies about afterlife and reincarnation is a recurring theme for some directors, like the Wachowskis who made “The Matrix” and then “Cloud Atlas,” and a topic of exploration for others like Peter Jackson who directed “The Lovely Bones.” “I Origins” will be the latest of these, hitting theaters July 18. Let’s take a look back at some of the best films that deal with the afterlife, reincarnation, and other spiritual phenomena.

‘I Origins’ is a sci-fi drama that centers around a molecular biologist fascinated with irises. He falls in love with and loses a beautiful girl. When he loses her, he sets out to see whether he can find a someone with the same eyes. Although he starts out an atheist, this scientist’s very fundamental beliefs get shaken when he does indeed find a match in a young girl who may be his lost love’s reincarnation.

In this epic sci-fi drama where Tom Hanks and Halle Berry take on new skins as they reincarnate from civilization to civilization, the directors Andy and Lana Wachowski tell the story of how everything and everyone is connected. It’s a 3-hour-long exploration of how actions of one single person can shape history, and how an act of kindness in a distant past inspires a revolution in the future.

In between the “Lord of the Rings” trilogies and “The Hobbit,” director Peter Jackson made a few films, one of which is “The Lovely Bones.” The film tells the story of a 14-year-old girl growing up in suburban Pennsylvania in the 1970s who gets murdered, but because she’s stuck in a place somewhere between Heaven and Earth, she’s set on helping out the people looking for her lost body.

A documentary, this story centers around a Nepalese Buddhist who is in search of the reincarnation of his master, Geshe Lama Konchog, who recently passed away. Tenzin Zopa, the disciple, finally finds a child who responds correctly to Konchog’s possessions and is then put through multiple tests to determine if he is indeed the reincarnation. After he passes the tests, he is taken to the Dalai Lama for instruction.

This Darren Aronofsky film tells three stories that span a millennium. One from the present, another from the future, and one from the past, the parallel stories revolve around the theme of a man in pursuit of eternity and love. Although some of his quests fail and others succeed, one thing persists throughout the film—the tree of life.

Directed by Jonathan Glazer, “Birth” tells the story of Anna, who has recently been widowed. As she tries to move on with her life, and gets engaged to a different man, she meets a boy who tries to convince her that he is the reincarnation of her dead husband. But the more time she spends with the boy, the more she starts to questions her life’s choices.

Although we’re stretching the definition of afterlife here, this Wachowski sci-fi classic is all about entering different dimensions, meddling with reality, and redefining the power of human thoughts. As computer geek Neo meets legendary computer hacker Morpheus, who reveals to Neo what is the true situation of the human world, he becomes the target of super-computer agents.

A Martin Scorsese film about the Dalai Lama, who was forced to escape from his home in Tibet because of the invasion by communist China. The lama, who is told that he is the reincarnation of his predecessor escapes to India and continues his life there as he learns the ways of the Dalai Lama.

In this Bernardo Bertolucci drama, a Buddhist lama comes to Seattle in search of the reincarnation of his dead teacher. He ends up finding a waif from Kathmandu and an upper class Indian girl. Both are then taken to Bhutan where they must undergo tests to see which one is the true reincarnation. The story of Siddhartha is also interwoven throughout the film.

In this classic comedy rom-com, Patrick Swayze, who plays the spirit of the recently deceased Sam Wheat, uses his time between Heaven and Earth to warn his widow about the onset of trouble. He communicates with her through psychic Oda Mae Brown. Although it’s hard for his wife to accept the situation at first, she soon realized what exactly her husband is trying to do.