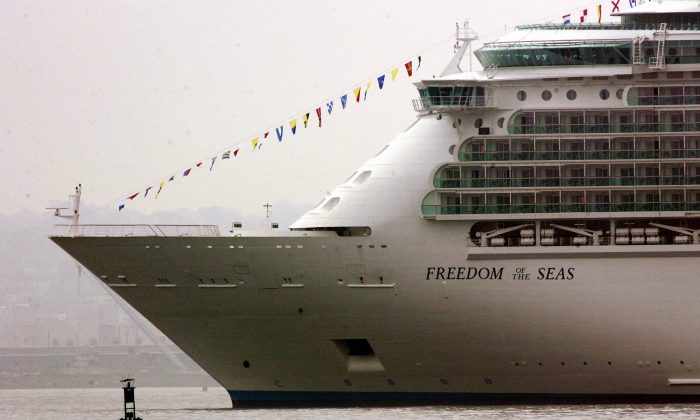 Freedom of the Seas sits off the shores of Bayonne, New Jersey, in New York Harbor on May 12, 2006. (Don Emmert/AFP/Getty Images)
US News

The father of an 18-month-old Indiana girl who died after falling several stories from a cruise ship July 7 was identified as a police officer.

The girl’s identity was not released, but police told The Associated Press that her grandfather Salvatore Anello of Valparaiso, Indiana, is under investigation.

Her father was also identified as Alan Wiegand, an officer in South Bend.

Toddler falls to her death after being ‘dangled out of window’ by her grandfather from 11th deck of a Royal Caribbean cruise ship https://t.co/QnWnOtT6X4 pic.twitter.com/P2343S1h4O

“The South Bend Police Department offers its sincerest condolences to Officer Alan Wiegand and his family during this difficult time following the tragic loss of their child while in Puerto Rico,” the South Bend police department said in a statement. “The department asks the community to pray for the entire Wiegand family as they grieve and to respect their privacy.”

The girl died on a Royal Caribbean cruise ship, Freedom of the Seas, said Port Authority spokesman Jose Carmona in a CNN report on July 8.

He said the girl was placed in the window by her grandfather before losing his balance. The girl then fell to her death, Carmona said, adding that she “died on impact.”

Statement from SBPD regarding the tragic news coming out of Puerto Rico involving the family of one of our officers. #southbend pic.twitter.com/xjyDSgmV8X

“We are deeply saddened by yesterday’s tragic incident, and our hearts go out to the family,” Royal Caribbean Cruises told the network in a statement. “We’ve made our Care Team available to assist the family with any resources they need. Out of respect for their privacy, we do not plan to comment further on the incident.”

Furthermore, South Bend Police Chief Scott Ruszkowsk told WSBT that the child wasn’t being held outside the window when the girl fell.

Police in Puerto Rico are investigating the matter, and Carmona described it as an accident. The 1-year-old’s body was taken to a forensic unit in San Juan, the capital.

The Freedom of the Seas eventually left San Juan on the evening of July 7 at 8:30 p.m. local time with 3,600 passengers on board, CBS News reported.

According to the website, Cruise Junkie, 12 people have fallen off cruise ships just this year, while since 2000, over 300 cruise and ferry passengers have gone overboard.