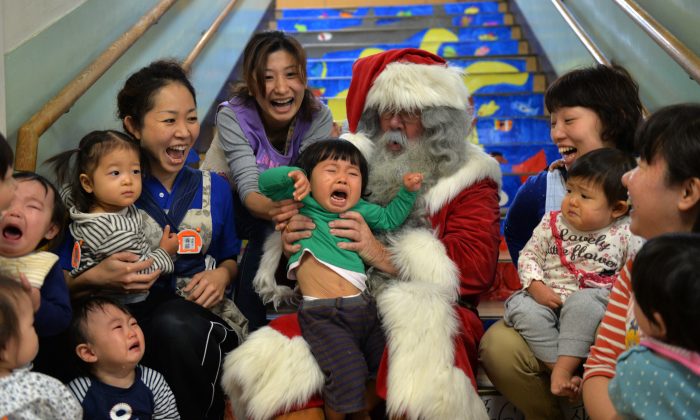 A man playing Santa Claus (C) from Finland sits with children at the Hinomoto nursery school in Tokyo on December 9, 2013. (Yoshikazu Tsuno/AFP/Getty Images)
US News

Visiting the mall and getting your photo taken with Santa is probably a holiday tradition you grew up with. But not everyone was a fan of the white-bearded, red-suited man with a large belly and a propensity for saying ho-ho-ho.

One child from Parkton, Maryland, was certainly not and his mom made sure to remind him of it every year.

Samuel Spencer was just 1 year old when he was photographed at Provo Town Center Mall sitting on Santa’s lap while he was signing for help, reported WXIA-TV. In the photograph, little Samuel looked a bit apprehensive about the man beside him and was signing something.

His mom, Kerry Spencer, said that her son was trying to say “help” using baby sign language she had taught him before he could even talk.

The photo has garnered a lot of attention and his mom, shares it on Facebook every year. This year, Spencer’s friend told her to tweet it, so she could retweet it. Now, the post has more than 6,800 retweets and 26,000 likes.

One social media user said it did not look like the little boy was signing for help.

Which sign variant is this? BSL and ASL are a bit different (thumb up fist on palm upwards flat hand). I think the left hand might be moving away? Maybe I'm overthinking this…

In response, Spencer said it was just a different variation of ASL sign language and that babies can “mispronounce” words when learning it.

As for Samuel, the 13-year-old seems to be enjoying the attention he is getting from being the scared toddler in the photo.

I happen to be the baby in this photo. You may direct all likes and follows to me now. https://t.co/oA5kvSZrcO

— That one baby that doesnt like Santa (@DextrousWolf) December 6, 2017