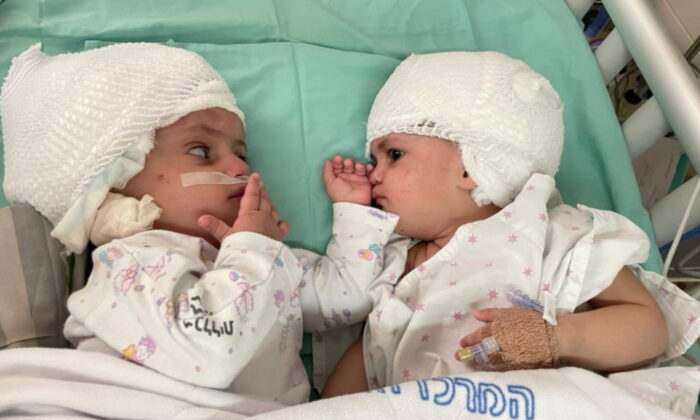 Israeli doctors say they have performed a complex surgery to separate one-year-old conjoined twins, the first such effort ever in Israel.

The twin girls were separated in a 12-hour procedure by Israeli and international medical experts at the Soroka Medical Center in southern Israel’s Beersheba, the center said in a statement sent to The Associated Press.

“To our great joy, everything went as we have hoped,” said Dr. Mickey Gideon, the director of pediatric neurosurgery at Soroka.

The twins were born in August of last year in Soroka hospital. The medical teams prepared to perform the operation over the course of the year.

Months before the operation, the twins were given skin and tissue expanders to stretch the skin and close the scalps after the procedure, the Soroka medical statement said.

It said the team used 3D models and virtual reality models to map out the complex procedure. This enabled simulations of the operation and practice before the actual procedure.

“During the operation, after the successful separation of the blood vessels, the bones were separated,” said the statement.

“At this point, the team members split into two teams that worked in parallel in two separate operating rooms, performing reconstruction of the skulls and scalps of each of the girls.”

Soroka medical center said some 50 staff members took part in the preparation and execution of the procedure.