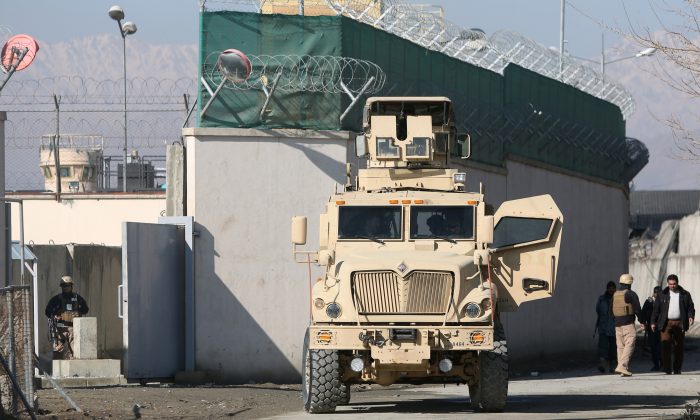 A U.S. military vehicle blocks a road to a logistics company near the site of a deadly suicide attack Monday night in Kabul, Afghanistan, on Jan. 5, 2016. The Taliban have claimed responsibility for the attack near the Kabul International Airport which killed several people and wounded at least 36 civilians, including nine women. (AP Photo/Rahmat Gul)
Middle East

WASHINGTON—One U.S. service member was killed and two were wounded in hours-long fighting Tuesday in southern Afghanistan, where Taliban insurgents have made recent inroads.

The fighting, which reflects intensified efforts by the U.S. and its Afghan partners to push back against Taliban gains, was near the city of Marja, Helmand province, which shares a border with Pakistan. The Taliban in recent weeks have focused their efforts on retaking parts of Helmand, and the U.S. has countered with U.S. special operations forces working with Afghan troops.

Details on the battle were sketchy.

“There is still a fight going on,” Pentagon press secretary Peter Cook said hours after the casualties were sustained. “We don’t yet have all the details surrounding what has taken place.”

He said Defense Secretary Ash Carter was being briefed on the situation by commanders in Afghanistan, but many key details were unclear. Cook said two U.S. helicopters were dispatched to the scene to provide medical evacuation for the U.S. casualties but could not complete the mission. One was waved off after taking fire and returned safely to its base, he said. The other landed safely but was unable to take off because its rotor struck a wall.

Cook said he could not say more about the three U.S. casualties.

“We are deeply saddened by this loss,” said Brig. Gen. Wilson A. Shoffner, a spokesman for U.S. forces in Afghanistan. Speaking for Gen. John Campbell, the top U.S. commander in Afghanistan, Shoffner said, “our heartfelt sympathies go out to the families and friends of those involved.”