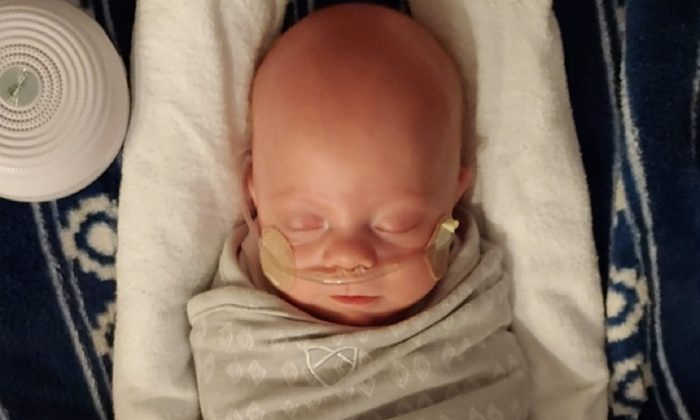 A baby born prematurely at one pound survived more than 100 days in the neonatal intensive care unit and was sent home after a remarkable recovery.

Finn James was born to Chris and Jessica Hill after they adopted an embryo from another family on Dec. 19, 2018.

On May 21, Jessica Hill’s water broke and she was rushed to the hospital. Doctors found that the placenta was detaching and performed an emergency c-section.

Finn was born at 24 weeks and four days and weighed slightly more than one pound.

Lacey Benigas, who organized a GoFundMe fundraiser for the family, said on Sept. 18 that the baby was finally able to leave the intensive care unit.

“Precious Fighting Finn is HOME! This journey has been long and difficult for the Hill’s, but they have experienced miracle after miracle along the way! Thank you for ALL of your donations and prayers!” she wrote.

One picture appeared to show the baby being held at home while another showed the baby asleep at home.

The Florida family shared additional pictures on Facebook, including one that showed the baby smiling and another that showed him asleep.

“Loving life at HOME. We are working hard to make sure his glucose levels don’t drop and he eats enough to gain weight … It’s a bit of a battle, but we are hopefully getting there. We would hate for this peanut to be re-admitted,” they wrote.

Jessica Hill told Good Morning America that doctors said there was a 50 percent chance Finn wouldn’t make it after he was born.

“Initially, it was just shock,” Hill said. “I started crying and asking my doctor, ‘What are his chances of survival if you take him out now?’ The doctor said he was safer on the outside than he was inside.”

“I felt a little bit like a failure to be honest because one second he’s inside of [me] and I’m protecting him, and the next he’s out and in a complete separate part of the hospital,” Hill added. “It was terrifying.”

The time in intensive care included a number of surgeries, including one to repair a hole in Finn’s heart. The surgery helped Finn improve.

When Finn arrived home, he weighed 5 pounds and 5 ounces.

Hill said she and her husband are grateful to the family that gave them the embryo and said Finn is a happy baby who is always smiling.