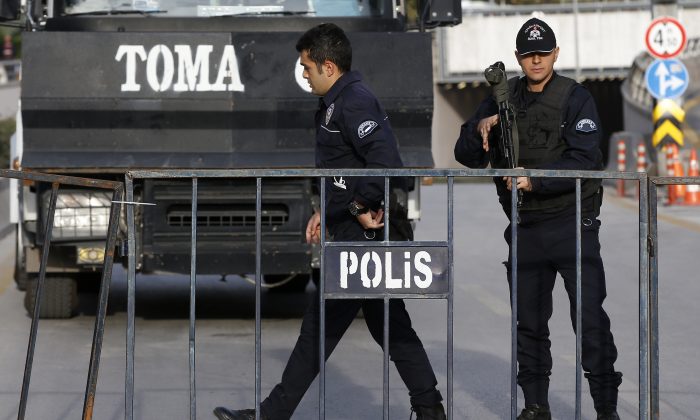 ISTANBUL—Turkish police have arrested one person in connection with the suicide bombing in Istanbul that killed 10 foreigners, most of them German tourists, the interior minister said Wednesday.

The suspect was detained late Tuesday, Interior Minister Efkan Ala said during a news conference with his German counterpart. He didn’t provide further details. Turkish media reports said police had raided a home in an affluent neighborhood of Istanbul, detaining one woman suspected of having links to the ISIS group.

On Wednesday, Turkish police also arrested 13 suspected ISIS extremists, including three Russian nationals, a day after the bombing in Istanbul’s historic Sultanahmet district. The attack, which also wounded 15 other people, including Germans, a Norwegian man and a Peruvian woman, was the latest in a string of attacks by Islamic extremists targeting Westerners.

Turkish authorities identified the bomber as a Syrian born in 1988, who had recently entered Turkey and wasn’t among a list of potential bombers wanted by Turkey. Turkish media, including newspapers close to the government, identified him as Nabil Fadli, and said he was born in Saudi Arabia.

Justice Minister Bekir Bozdag said Wednesday that authorities were working to identify people connected to the attacker. He wouldn’t provide details on the investigation, saying it would compromise those efforts.

The Russians were detained in the Mediterranean coastal city of Antalya, a popular destination for tourists, but it wasn’t clear if the arrests were directly linked to the Istanbul bombing. The state-run Anadolu Agency said the suspects were allegedly in contact with ISIS extremists in conflict zones and had provided logistical support to the group. Ten other people were detained in Turkey’s third largest city, Izmir, and in the central city of Konya.

The Russian Foreign Ministry in November said the number of Russians that left for Syria to fight for the ISIS group at 2,719. Of these, 160 have been killed, 73 have returned and been tried and 36 have been arrested.

Tuesday’s blast just steps from the historic Blue Mosque was the first by ISIS to target Turkey’s vital tourism sector, although the militants have struck with deadly effect elsewhere in the country.

Eight Germans were among the dead and nine others were wounded, some seriously, German Foreign Minister Frank-Walter Steinmeier told reporters in Berlin. The nationalities of the two others killed in the blast weren’t immediately released, but both were foreigners

German Interior Minister Thomas de Maziere arrived in Istanbul for talks with Ala and other Turkish officials to discuss the attack.

It wasn’t clear if the attacker had specifically targeted Germans.

Assailants Fire Shots at US Consulate in Istanbul

Germany committed Tornado reconnaissance jets to the military effort against the ISIS group in Syria following the November attacks in Paris, and started flying missions from the Incirlik air base in Turkey last week. It also sent a tanker aircraft, as well as a frigate to help protect a French aircraft carrier in the eastern Mediterranean. It hasn’t taken a direct combat role, however. Germany already was helping supply and train Kurdish forces fighting ISIS in northern Iraq.

The impact of Tuesday’s attack, while not as deadly as two others last year, was particularly far-reaching because it struck at Turkey’s $30 billion tourism industry, which has already suffered from a steep decline in Russian visitors since Turkey shot down a Russian warplane near the Syrian border in November.