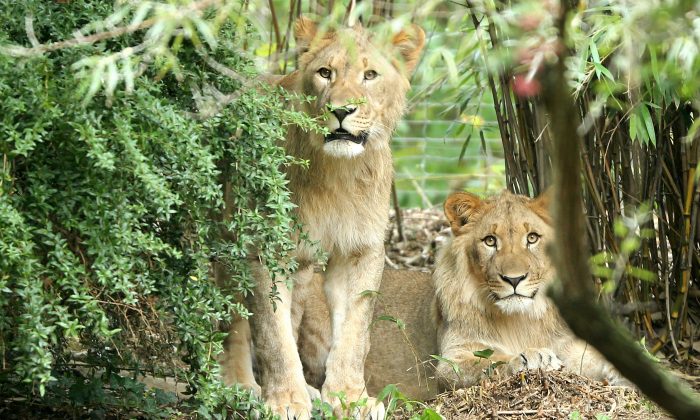 Lions Motshegetsi (L) and Majo at the zoo in Leipzig. eastern Germany, in this file photo. (Jan Woitas/dpa via AP)
International

BERLIN—Animal rights activists have called for an investigation after one of two lions who escaped from their cage at the Leipzig Zoo in Germany was shot dead Thursday.

The zoo said Majo and Motshegetsi, two juvenile males, had escaped from their enclosure overnight. Keepers were able to corral Majo back into the cage and shot Motshegetsi with a tranquilizer.

But zoo director Joerg Junhold said the tranquilizer failed and the lion had to be shot, the dpa news agency reported.

“In this case, the safety of people came first,” Junhold said.

No one was injured in the incident, and details of how the lions got out of their cages were not released.

The German Animal Protection Association said the zoo had a duty to ensure that the animals couldn’t escape, for their sakes and those of the visitors.

It said there had been eight incidents involving large cats at German zoos in the past four years and called for a debate on whether such animals should be kept in zoos and under what conditions.