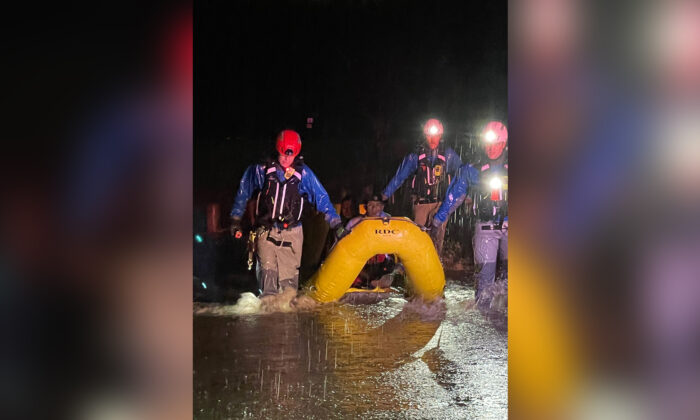 1 Killed in Texas as Damaging Storms Tear Across South

MONTGOMERY, Ala.—Violent storms killed one person in Texas on Tuesday as hail pelted communities and high winds knocked trees into power poles elsewhere in the South. Authorities issued a flurry of tornado warnings at the start of what could be two days of violent weather in the region.

In eastern Texas, W. M. Soloman, 71, died when storm winds toppled a tree onto Solomon’s home in Whitehouse, about 100 miles southeast of Dallas, Whitehouse Mayor James Wansley said. Officials said at least four homes in the area had trees fall on them.

More than 50,000 homes and businesses were without power Tuesday afternoon from eastern Texas to South Carolina. No injuries were reported, but the National Weather Service issued a nonstop stream of tornado warnings for hours as the storm system tore across Mississippi, Alabama, Georgia, and South Carolina.

In South Carolina, Allendale County Manager William Goodson said a tornado, captured in a video on social media, caused damage in his rural county, but exactly how much and whether there were any injuries were unknown.

“I know we have buildings damaged and power lines down,” Goodson said. “My deputies and emergency officials are out there assessing it.”

The weather service said it was sending survey teams to examine potential tornado damage in Wetumpka, Alabama. Lightning struck a flea market in the north Alabama community of Lacey’s Spring, causing a fire that gutted the building, news outlets reported, and rising water in Mobile Bay covered part of a ramp on Interstate 10.

Fallen trees and limbs closed a stretch of highway for several hours in Newton County, Mississippi. As the line of storms pushed into Georgia, a large tree fell and crashed through the roof of Marie Jordan’s home in metro Atlanta, coming down in the living room, kitchen and garage.

“It just took everything,” Jordan told WSB-TV. “For years and years, I have watched that tree.”

Elsewhere in Texas, one person was injured when the storms swept through Johnson County, about 40 miles southwest of Dallas. Brittaney Deaton said she became trapped in an RV trailer behind her family’s home after the trailer flipped over. She said her stepfather got injured trying to free her.

“I was screaming on the phone. I couldn’t get out. I was terrified,” Deaton told KDFW-TV. “And I felt like I was just trapped, like it was going to roll with me in it. And I just thank God that I got out.”

Her mother, Amber Zeleny, said her husband suffered injuries to his nose, leg and ribs but that he was expected to recover.

Severe storms with powerful tornados are possible across a broad area stretching from southern Mississippi to the coasts of Georgia and South Carolina, the Storm Prediction Center said. The area most at risk includes more than 8 million people in the Alabama cities of Mobile and Montgomery; Tallahassee, Florida; and Columbus and Savannah in Georgia.

Isolated areas could receive as much as 5 inches of rain during the day Tuesday, increasing the risk of flash flooding and softening the ground so that even more trees could blow down, forecasters said.

The threat of damaging weather will move to the north on Wednesday, forecasters said, with severe storms possible across an area stretching from western Alabama to the western tip of the Carolinas. More than 10 million people in metro areas including Atlanta; Birmingham; and Chattanooga, Tennessee, will be at risk, the Storm Prediction Center said.

Springtime often brings strong storms to the Southeast, and the region has faced a barrage of weather recently that included a tornado last month in metro New Orleans, where one person died, and storms that killed at least two people in the Florida Panhandle last week.