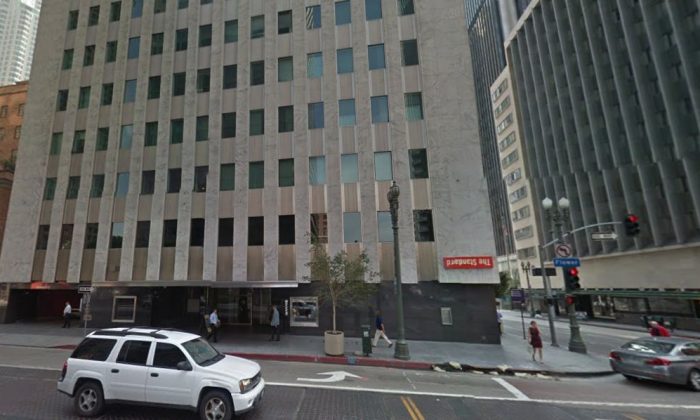 '"It sounded like heavy machinery falling'
By Jack Phillips

One person was killed and three people were injured outside the high-end Standard Hotel in downtown Los Angeles, California.

The Los Angeles Times reported the shooting on early Sunday took place at the Standard Hotel, a popular hotel downtown that is frequented by celebrities.

The incident took place at 2:20 a.m. in the 500 block of South Flower Street at the hotel, LAPD spokesperson Rosario Herrera told the newspaper.

One of victims, who was not identified by police, died at the hospital. Another victim was paralyzed, the LAPD said. The two other victims were in stable condition, NBC LA reported.

Hotel employees told the Times the victims were found by the elevators behind the lobby front door. One of the lobby doors was shattered.

3 shot after fight outside The Standard Hotel in DTLA https://t.co/kdHRlE1Tz6 Conditions of injured unknown pic.twitter.com/cvuiwG2gmF

LAPD officers called back to homicide scene @ the Standard Hotel. A handgun has been found underneath a car. @NBCLA pic.twitter.com/0Fy3hiGISi

An employee said a parking attendant found a handgun at around 9 a.m. local time on Sunday in a nearby parking lot.

No arrests were made in the shooting.

A couple staying at the hotel woke up to the sound of loud popping noises.

“It sounded like heavy machinery falling,” the man, who asked not to be identified, told the Times. Then he heard five to six gunshots farther away. “Then there were sirens,” he said.

News website MyNewsLA.com reported that a “fight between a suspect” and the four victims took place before the shooting.

“We do not have any suspect description and there were no arrests,” Herrera told the site.