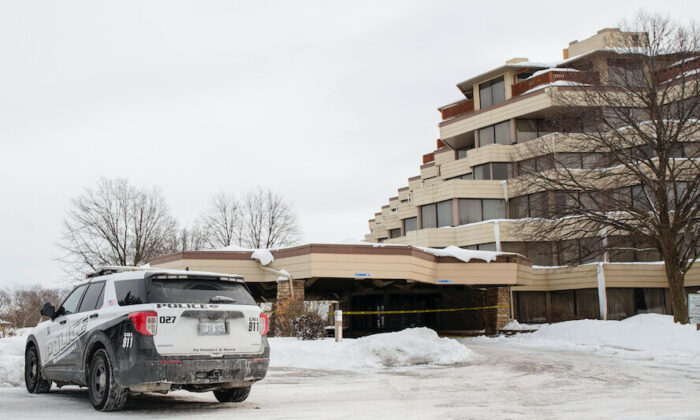 Police investigate the scene of a shooting at the Indian Lakes Hotel in Bloomingdale, Ill., on Feb. 6, 2021. (Pat Nabong /Chicago Sun-Times via AP)
Crime and Incidents

BLOOMINGDALE, Ill.—A shooting early Saturday during a large gathering at a suburban Chicago hotel, which has been a hot spot for crime, left one man, a rapper, dead and several other people wounded, police said.

The shooting occurred during “some type of large get-together” among guests at the Indian Lakes Hotel in Bloomingdale, according to Bloomingdale Public Safety Director Frank Giammarese.

“It’s senseless to me that the two groups of people are coming for a party or a rap video or whatever and people end up shooting each other and people are dying,” he said.

Investigators were still piecing together what happened, but “it appears that there were a couple of different groups attending different events at the hotel” when “something transpired and that’s when the shooting took place, mostly in the hallways at the hotel,” Giammarese added.

People were fleeing the hotel when officers arrived about 2:35 a.m. in response to a report of shots fired on the fifth floor. Officers found “multiple apparent gunshot victims” inside, police said in a news release.

South Side rapper James McGill Jr., 27, of Chicago, was pronounced dead at a hospital, according to the Cook County medical examiner’s office, the Chicago Sun-Times reported.

McGill’s cousin, FBG Duck, also a rapper, died during a shooting a few months ago, according to social media posts.

As many as six other people were hit by gunfire, but the exact number was unknown because several people fled—including one or more possible suspects, Giammarese said. No police officers were shot, he said.

He said there have been “ongoing concerns” about large gatherings at the hotel in the recent past, adding that there has been a “drastic spike in crime” involving drugs and fights that he attributed to the hotel’s current management company First Hospitality Group.

“We almost predicted that something could happen there,” he said of concerns regarding a lack of consistent security presence at the venue.

Bloomingdale Mayor Franco Coladipietro said in an online post, “The unfortunate incident that occurred this morning may have been avoided if security was present as First Hospitality Group had promised in our meetings,” referring to the hotel’s current management company.

He added that the Village of Bloomingdale will be looking into revoking the hotel’s business license.

A spokesperson for First Hospitality Group told the Chicago Sun-Times in an email, “our thoughts are with the individuals directly impacted by this tragedy.

“We are grateful to our associates who immediately responded to the disturbance and to the Village of Bloomingdale Police Department for their swift intervention. We have worked closely with the Village of Bloomingdale over many years to ensure the safety and security of all guests and associates of the hotel, and will continue to cooperate with this ongoing investigation,” the spokesperson said.