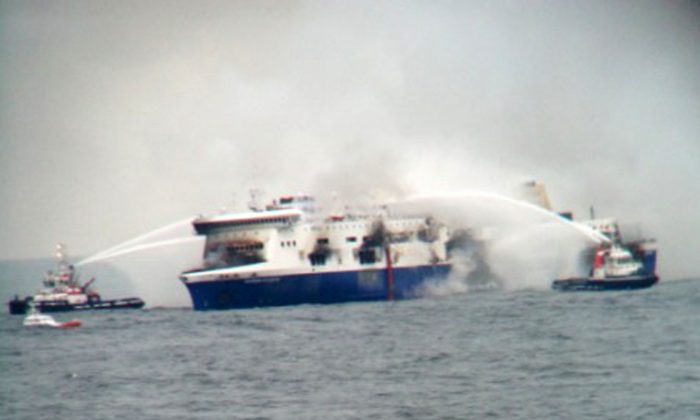 In this photo taken from a nearby ship, vessels try to extinguish the fire at the Italian-flagged Norman Atlantic after it caught fire in the Adriatic Sea, Sunday, Dec. 28, 2014. Italian and Greek military and coast guard rescue crews battled gale-force winds and massive waves Sunday as they struggled to rescue hundreds of people trapped on a burning ferry adrift between Italy and Albania. At least one person died and two were injured. The Italian Defense Ministry said 165 of the 478 people on the ferry had been evacuated by Sunday evening, more than 14 hours after the fire erupted. (AP Photo/SKAI TV Station)
Europe

ATHENS, Greece—Hundreds of passengers and crew braved smokey fire, frigid temperatures and gale-force winds Sunday as they waited for nearly a day to be evacuated from a burning ferry adrift in rough seas between Italy and Albania. At least one person died and two were injured in the risky rescue operation.

The Italian Navy said 190 of the 478 people on the ferry, sailing from the Greek port of Patras to Ancona in Italy, had been evacuated by late Sunday night. Most were airlifted by helicopter to other merchant vessels sailing nearby, though a few were flown to hospitals in southern Italy to be treated for hypothermia.

“It will be a very difficult night. A night in which we hope we will be able to rescue all on board,” Greek Merchant Marine Minister Miltiadis Varvitsiotis said in Athens.

He said 10 merchant ships were in the area assisting rescue efforts, and that those who had already taken on dozens of passengers from the stricken ferry would remain in the area until the operation was over. Only then would it be determined where they would go, Varvitsiotis said.

Nevertheless, officials in the Adriatic port of Brindisi were preparing for the first large group to arrive — some 49 people, expected sometime after midnight, the coast guard said.

The fire broke out before dawn Sunday on a car deck of the Italian-flagged Norman Atlantic, carrying 422 passengers and 56 crew members. Passengers huddled on the vessel’s upper decks, pelted by rain and hail and struggling to breathe through the thick smoke, passengers told Greek media by phone.

“We are outside, we are very cold, the ship is full of smoke,” passenger Giorgos Stiliaras told Greek Mega TV.

He recalled people being awakened by “the smell of burning plastic” and that the heat from the fire felt like the floors were “boiling.”

The ferry was last inspected by the Patras Port Authority on Dec. 19 and six “deficiencies” were found, but none were so grave as to keep it in port, according to the report on the European Maritime Safety Agency’s website.

The deficiencies involved a “malfunctioning” fire door as well as “missing” emergency lighting and batteries and defective “watertight doors.”

The ship manufacturer, Carlo Visentini, was quoted by the ANSA news agency as saying that only one of the 160 fireproof doors was found to be problematic in the inspection and that it was located above the fire zone. Visentini said the problem was fixed immediately to the satisfaction of the inspectors.

Italy and Greece sent navy and coast guard vessels and helicopters to the extensive rescue operation, while nearby merchant ships lined up to form a barrier to protect the ferry from towering waves. As darkness fell, Italian Defense Minister Roberta Pinotti said rescue operations would continue through the night.

The Italian Coast Guard, which was coordinating the rescue operation, said those flames visible from the outside of the ship had been extinguished by about 8:30 pm (1930 GMT), about 16 hours after the blaze began. But the ferry was still enveloped in dense smoke, which the Coast Guard probably said was being fueled by some hotspots inside the ship.

Varvitsiotis described the efforts as “one of the most complex search and rescue operations we have dealt with in recent years.”

“With the wind, smoke entered into the helicopter cabin, acrid smoke,” Maj. Antonio Laneve told Italian state TV. Some of those they were trying to rescue were very frightened of being hoisted up by helicopter given the adverse weather, he said.

Nine of those evacuated were taken to the Italian town of Lecce, authorities said. Of those, three children and a pregnant woman were being treated for hypothermia in Lecce hospital. Dr. Raffaele Montinaro said the children were in “excellent” condition, and emergency room doctor, Antonio Palumbo, said the mother’s condition was also good.

“For sure they are scared,” said Eligio Rocco Catamo, manager of the Copertino hospital. “But I should say that I was impressed by the calm and the serenity they are showing.”

A local convent was housing survivors who were released from the hospital.

The Italian Navy said the man who died and his injured wife were transported by helicopter to the southern Italian city of Brindisi. It was unclear how the death and injury occurred, but the Greek Coast Guard said the pair — both Greek passengers — were found in a lifeboat rescue chute.

The second injury was to a member of the Italian military involved in the rescue operation, Coast Guard Admiral Giovanni Pettorino said.

Pettorino told Italy’s Sky TG24 TV that two Italian tugs tried to attach themselves to the ferry in the evening, but were frustrated by the thick smoke.

Passengers described scenes of terror and chaos when the fire broke out as they slept in their cabins.

“They called first on women and children to be evacuated from the ship,” Vassiliki Tavrizelou, who was rescued along with her 2-year-old daughter, told The Associated Press.

“Ships could not approach us because of the rain and winds,” Tavrizelou said in a telephone interview from Lecce. “We were at least four hours on the deck, in the cold and rain.”

She recalled the ship alarm going off and seeing fire from her cabin. “Then we heard explosions,” she said. It was not immediately clear what the explosions were, and the cause of the fire has yet to be determined.

The ship, run by a Greek ferry company, was packed with holidaymakers and truck drivers making the popular transport run between Greece and Italy. Of those on board, 234 passengers and 34 crew are Greek, said Greek Merchant Marine spokesman Nikos Lagadianos.

Other passengers are from several other countries, including Turkey, Albania, Italy, Germany, Switzerland, Belgium and France. The crew is Greek and Italian.

Greek Prime Minister Antonis Samaras was in contact with his Italian counterpart, Matteo Renzi, to coordinate the operation.

From The Associated Press. Costas Kantouris in Thessaloniki, Greece, and Derek Gatopoulos, Nicholas Paphitis and Elena Becatoros in Athens contributed to this report.