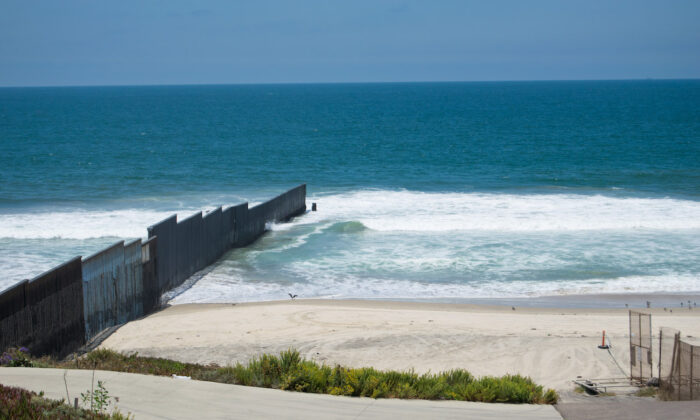 The barrier of the U.S.-Mexico border, which ends in the Pacific Ocean in San Diego, is pictured on July 12, 2017. (Benjamin Chasteen/The Epoch Times)
Immigration & Border Security

1 Dead After Large Group Try to Illegally Swim Into US: Border Patrol

One person is dead after a large group of people tried to illegally enter the United States by swimming and entering the beach at Border Field State Park in San Diego, California, border authorities said.

Border patrol agents were notified around 11:40 p.m. on Oct. 29 of a group of about 70 people trying to illegally swim across the international boundary, around the border barrier between San Diego and Tijuana, Mexico, according to a release from Customs and Border Protection (CBP).

Agents found an unresponsive woman they believed came from the group of swimmers, and they immediately performed CPR on the woman. Emergency medical services arrived on the scene and continued trying to resuscitate her, but she was unresponsive and was pronounced dead at about 12:30 a.m.

“This is yet another example of the ruthless tactics smuggling organizations use to bolster their power and profits,” San Diego Sector’s Chief Patrol Agent Aaron Heitke said in a statement. “We will work tirelessly to pursue and bring to justice those responsible for this tragedy.”

Multiple agencies were also searching the area in the early hours of Oct. 30 “in efforts to locate any outstanding persons who may have been in distress.”

The U.S. Customs and Border Protection’s office of professional responsibility were investigating, per standard procedure.