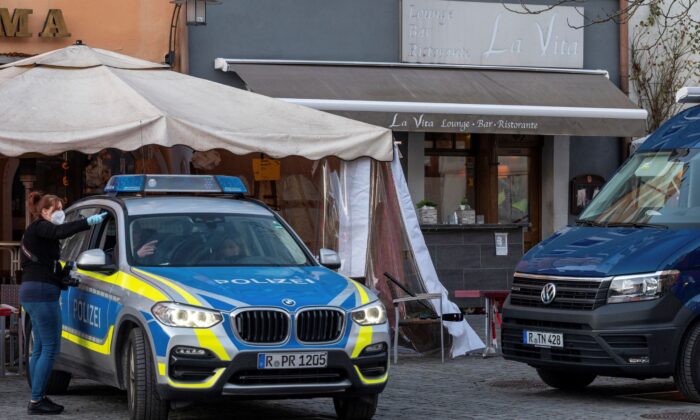 Police vehicles are stand in front of a restaurant in the city of Weiden, Germany, on Feb. 13, 2022. (Armin Weigel/dpa via AP)
Europe

1 Dead, 8 in Hospital After Spiked Champagne in Bavarian Bar

BERLIN—One man died and eight others were hospitalized in serious condition after drinking spiked Champagne at a bar in Bavaria, German prosecutors said Monday.

The man who died was 52 years old, and the others were between 33 and 52, police told German news agency dpa.

“There were things in it that normally are not in Champagne.” senior prosecutor Gerd Schaefer said. “It had a toxic, a poisonous effect.”

Schaefer said toxicological tests have been completed and the poisonous substance was known, but he would not confirm local media reports that the champagne could have been laced with the drug Ecstasy.

Police said the incident happened Saturday night in the Bavarian town of Weiden, shortly after a group of people had ordered and shared one bottle of champagne. When police arrived at the bar, they found people lying on the ground with cramps and eight of them had to be hospitalized.

The 52-year-old man died shortly after he was admitted to the hospital on Saturday night.

Schaefer said there was a suspicion of negligent homicide, but he did not want to give further details citing the ongoing investigation.