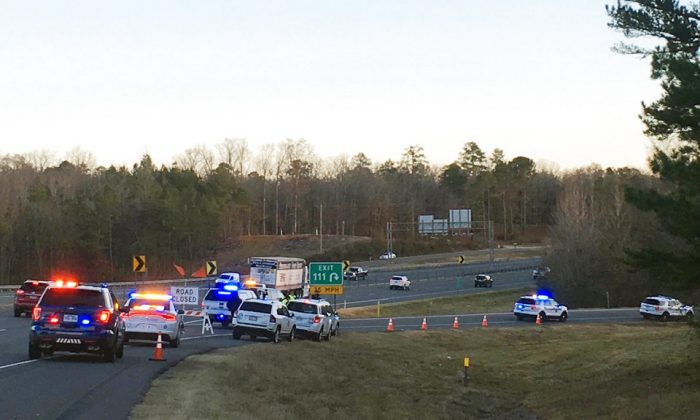 Emergency vehicles are parked along Interstate 30 near the scene where a charter bus that was carrying a youth football team from Tennessee crashed near Benton, Ark., early Monday, Dec. 3, 2018. The bus was carrying the team from Texas to Memphis, Tenn. (Josh Snyder/The Arkansas Democrat-Gazette via AP)
Crime and Incidents

The crash took place on I-30 near Little Rock in Saline County around 2:40 a.m., according to the Arkansas State Police.

The exact location was at the 111-mile marker, at an exit ramp. The bus appeared to leave the road as it was exiting on the curved ramp.

The OMY A Elite football team was returning to Memphis after an All-Star game in Texas. The team, with players ranging in age from 8 to 12, was part of the Orange Mound Youth League, reported Fox 13.

**Update** I was just told that there is now at least one fatality.Praying that everyone is ok!! More than 50 kids &…

In addition to the death and injuries, the crash left three to five children trapped.

One of four coaches on the bus told WMC that the bus rolled over four times. More than 50 people were on the bus.

The patients who were taken to Baptist and St. Vincent had been released hours after the crash after being treated.

Arkansas Children’s Hospital said that it had received over 20 patients at its emergency room and had set up a family center for victims’ families.

An official at the hospital told KARK that as of 8:30 a.m. local time, of the 24 patients there, all were stable with nonlife-threatening injuries.

The bus driver was being questioned by state troopers. It’s not clear yet what caused the crash. A picture from the scene showed firefighters at the site of the crash, with the bus lying on its side amid trees off the roadway. As of 8:15 a.m., the exit ramp was still closed as troopers investigated and tried to reconstruct the accident, reported KARK..


A helicopter brought in investigators with the state police to provide a better view of the crash before landing.

Chaka Dunlap-Williams, who posted the picture, said that two of her nephews rode on the bus to Texas but were not on the bus on the way back.

“My sister made them ride in the car with her back home,” she said.

“On behalf of all Memphians, our hearts and prayers go out to the Orange Mound children and their families involved in this morning’s tragic bus accident in Arkansas,” he said.

On behalf of all Memphians, our hearts and prayers go out to the Orange Mound children and their families involved in this morning’s tragic bus accident in Arkansas.