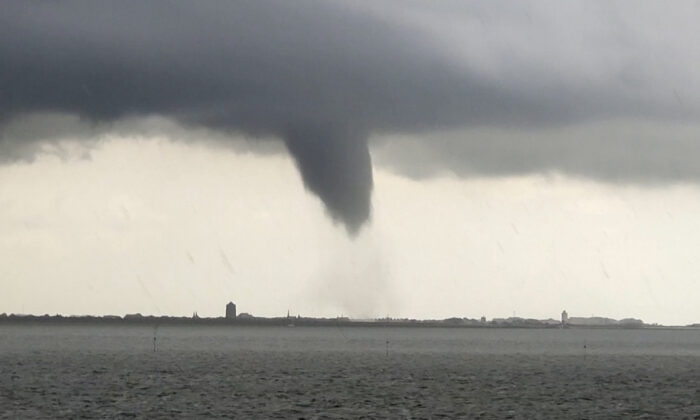 A tornado above the town of Zierikzee, the Netherlands, on June 27, 2022, in a still from video. (B de V Photography via Reuters/Screenshot via The Epoch Times)
Europe

THE HAGUE, Netherlands—One person was killed and about 10 injured Monday as a “weak tornado” ripped through a historic fishing town in the southern Netherlands, tearing the roofs off at least four houses and sending café furniture flying through the streets.

Video posted on social media showed a waterspout close to the town of Zierikzee.

“There is, sadly, one fatality to mourn as a result of the whirlwind,” Veilig Zeeland, the organization that coordinates emergency response in the region, said in a statement. “In addition, the first assessment is around 10 injured.”

Dutch weather website weerplaza described the storm as a “weak tornado,” a combination of a tornado and a waterspout, and said such events happen a few times each year in the Netherlands.

The organization urged people to stay out of the area as the cleanup got underway in the town with just over 10,000 residents about 140 kilometers (87 miles) southwest of Amsterdam.

“In addition to rooftiles flying around and knocked-down trees, the roofs have been blown off four homes,” the organization said.

A storm front crossed the Netherlands from south to north Monday, dumping heavy rain on parts of the country.