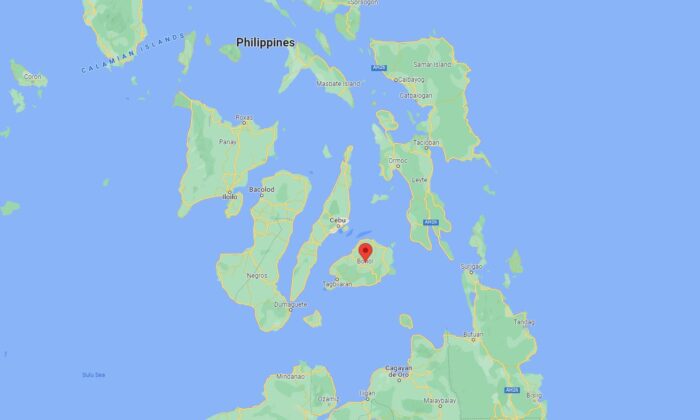 A map showing the location of the island of Bohol in the Philippines. (Google Maps/Screenshot via The Epoch Times)
Asia & Pacific

MANILA, Philippines—An inter-island ferry with 165 passengers and crew caught fire off a central Philippine province Sunday, leaving one dead and another missing while the rest were safely rescued, the coast guard said.

Footage on social media showed people in life vests bobbing in the sea, with the vessel engulfed in thick black smoke.

The ferry, which was carrying eight crew members and 157 passengers, including 15 children, was en route to the eastern province of Leyte from Bohol.

Sea accidents are common in the Philippine archipelago because of frequent storms, badly maintained boats, overcrowding, and weak enforcement of safety regulations.

In December 1987, the ferry Dona Paz sank after colliding with a fuel tanker, killing more than 4,300 people in the world’s worst peacetime maritime disaster.