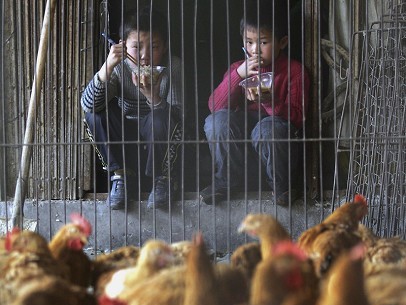 The H1N1 virus was recently discovered in Guangxi, where over 60 residents in the villages of Dingsan and Eshan had symptoms, and a 10-year-old boy died. The photo shows a bird market in China. (Getty Images)
China

1 Child Dead, Over 60 Infected With H1N1 Flu in South China

A 10-year-old boy died due to the H1N1 strain of bird flu, and over 60 other children were infected with the disease, at a school last week in the Guangxi autonomous region in southern China, possibly due to a cheap consignment of live chickens sold in the local village 10 days earlier. These infections occurred in the midst of ongoing nationwide concern about the H7N9 strain of bird flu.

On Friday state media reported the outbreak at the Dingsan Elementary School in Laibin City. The one student had died the previous day, while five others were hospitalized in critical condition.

Local health authorities said 64 people, mostly school-age children, in the villages of Dingsan and nearby Eshan had similar symptoms such as fever, according to a report by Sina News.

A doctor surnamed Jin at Shiya Village Health Center told The Epoch Times that he had received 36 patients on Friday, and the severe cases were sent to Laibin Hospital. “The virus is still spreading,” he added. “The number of infections is going up as we speak.”

Four samples taken by the local health department tested positive for Influenza A and an H1N1 influenza virus, but the officials did not disclose the source. The Dingsan Elementary School was closed for a week to prevent any further spreading.

On April 5, three cases of H1N1 were confirmed in students at the Rongshui Middle School, about 180 kilometers away, according to China News.

Chinese epidemic expert Zhao Dahai told New Tang Dynasty Television that authorities should investigate the route of infection immediately. “They need to find out who was infected first among the 64 people, and whether the later infections were due to the earlier ones.”

A Shiya Village resident called Mr. Wang told The Epoch Times that 10 days before the outbreak, peddlers from Nanning brought in truckloads of chickens and sold them at very low prices. The flu symptoms started appearing about five days later, he said.

He added: “Locals believe these chickens were already carrying the influenza virus. A chicken usually costs around 20 yuan, but these ones were only 8 to 15 yuan each. The people here bought them to eat as they didn’t realize the chickens were infected.”

H1N1 was the main strain active in the 2009 bird flu epidemic, but has not been heretofore been prominent in this year’s bout of bird flu, which has centered on the H7N9 strain. The state mouthpiece Xinhua said on Monday that 35 people have now died of H7N9 bird flu of 130 reportedly infected.