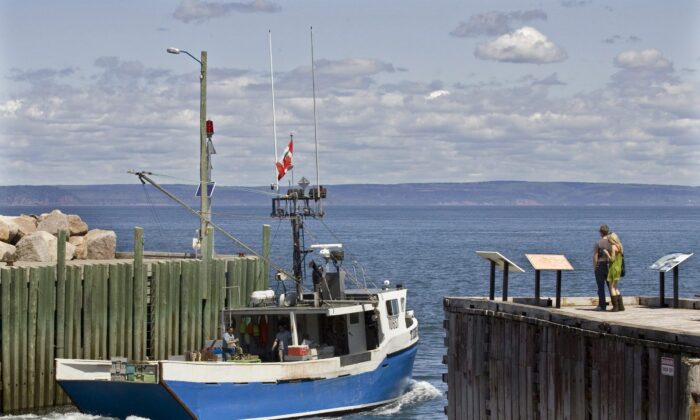 A fishing boat heads out into the Bay of Fundy from Hall's Harbour, N.S., in a file photo. (The Canadian Press/Andrew Vaughan)
Canada

HALIFAX—A survey estimates more than 1.8 million pieces of garbage are strewn over the bottom of the Bay of Fundy, prompting concerns about potential harm to marine life.

The study published Thursday in Marine Pollution Bulletin found an average of 137 pieces of plastic litter, dumped or lost fishing gear and other garbage per square kilometre of ocean.

The researchers used underwater photography at 281 locations over the past three years to extrapolate the amount of garbage present in a bay known for its fisheries, and for sea life that ranges from whales to scallops.

Plastics, especially plastic bags, comprised slightly over half of the total, while fishing gear ranging from traps to gloves was close to 30 percent, and other garbage, including tires or metal, was just over one fifth of the total waste documented.

Biologist Tony Walker, assistant professor in the school for resource and environmental studies at Dalhousie University, said the litter eliminates potential habitat by covering the bottom.

“A tire made of rubber or some metal is actually occupying space that would be benthic habitat for micro-organisms and small invertebrates,” he said in an interview.

Walker, one of six co-authors, said the garbage “is occupying a footprint on what should otherwise be a pristine, sandy ocean habitat.”

In addition, the plastic could eventually break down into microscopic pieces that enter the food chain, he said. Walker said there’s a growing body of scientific work documenting how microplastics are ingested and held in marine life, including invertebrates such as rock crab.

“There is a potential for it to have negative impacts. …. A precautionary principle should kick in, and we should do our best to avoid this pollution,” he said.

Researcher Alexa Goodman, lead author of the study, recommends that government and the fishing industry work to establish a recycling system for fishing gear. “We need to work with the industry to find better ways to manage solid waste,” she said in an interview.

In addition, she said she favours government initiatives to ban single-use plastics and encourages individual citizens to stop using plastics in items such as coffee cups.

The Nova Scotia government recently passed a bill that would see single-use plastic bags banned in the province by this time next year.

The research paper notes that Canada signed the Ocean Plastics Charter and there is “a growing sense of urgency to move forward with these commitments to improve land and ocean-based waste management.”

In addition, Canada was the 13th nation to join World Animal Protection’s Global Ghost Gear Initiative, an international alliance of nations, companies, and environment groups started in 2015 to address the issue of lost or discarded fishing gear.

Measurements show fishing nets make up almost half the weight of the 80,000-tonne Great Pacific Garbage Patch, a soupy mess of broken down bits of plastic floating in the Pacific Ocean between Hawaii and California.