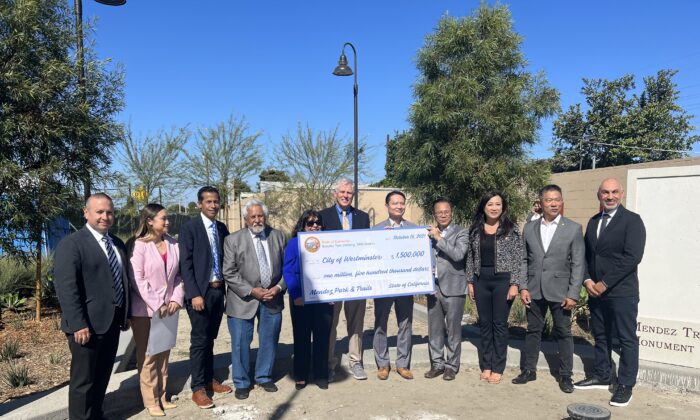 A $1.5 million check was given to the city of Westminster, Calif., on Oct. 19. (Drew Van Voorhis/The Epoch Times)
Southern California

A $1.5 million check was given to the city of Westminster, California, on Oct. 19 by state Sen. Tom Umberg (D-Santa Ana) Oct. 19 that will allow for the completion of the Mendez Freedom Trail in honor of a 1940s civil rights case that desegregated California public schools.

The denial of the Mendezes into the white-only school prompted them and other families of Mexican descent to challenge the segregation in court—where a U.S. Ninth Circuit Court of Appeals ruled in favor of the families in 1947—with the decision helping to end the segregation of California schools.

The win paved the way for the more well-known 1954 Brown v. Board of Education, which made it federally illegal to segregate people by race.

In attendance at the conference was Sylvia Mendez, one of the children represented in the case, who is now a civil rights activist.

The money will help the Mendez Freedom Trail and the Mendez Tribute Monument Park—honoring the legacy of the segregated children and the successful court case.

The park will feature statues of children holding books in an effort to symbolize the 5,000 children represented in the class-action lawsuit, and will also have statues of Gonzalo and Felicitas Mendez.

Additionally, the walls in the park will be interactive for children and “come to life” with a smartphone or computer and teach about the history of the case, a first of its kind for a community park.

“It’s an important project, not just for today, but for a long long time in the future,” Umberg said. “It’s important because we want to make sure that young people know what courage it took by the Mendez family to right a wrong. It’s so important in our history that our young people understand the mistakes we’ve made.”

Talking to Sylvia, Umberg said, “Your parents recognized this mistake and they had the courage to correct that mistake. It’s another lesson for young people that when you see a wrong, it’s your responsibility to correct that wrong, and they did that.”

Former Westminster Councilman Sergio Contreras, who originally brought the project to the council’s attention in 2017, said he wanted people, and especially children, to learn about the groundbreaking case, due to him not knowing about it for many years despite growing up in Westminster.

“I grew up here, went to school here. Why didn’t I learn about it? And I asked myself how can we change that. So thankfully with the help of the council we want to make sure that every student learns about it while they’re still in elementary school, and use it as a story to empower themselves about what’s possible when you come together and believe in equity, equality, and it’s really exciting to have students learn about it at an early age,” Contreras said.