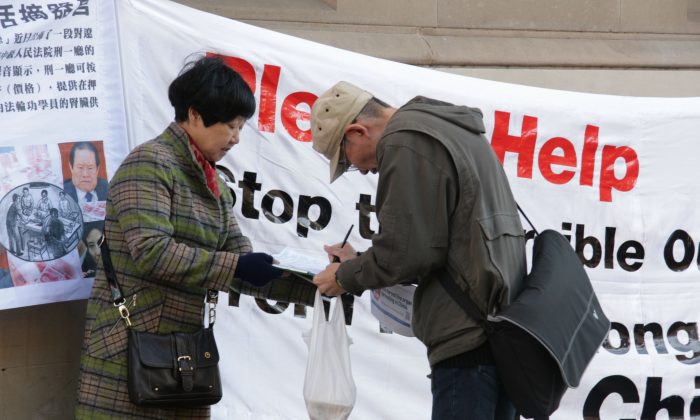 A passerby in Sydney, Australia, signs a petition calling for an end to the atrocity of forced organ harvesting of Falun Gong practitioners in China, on July 6, 2013. The signature is one of nearly 1.5 million from across the world presented to the office of the U.N. High Commissioner for Human Rights on Dec. 9, 2013. (Minghui.org)
China

1.5 Million in 53 Countries Say ‘No’ to Organ Harvesting in China

A grass-roots movement that has spanned 5 continents and 53 countries reached a climax Monday morning in Geneva when a delegation from the organization Doctors Against Forced Organ Harvesting formally presented to the office of the U.N. High Commissioner for Human Rights a petition that has garnered almost 1.5 million signatures. The presentation was timed to coincide with International Human Rights Day, which falls on Tuesday, Dec. 10.

The petition asks the high commissioner to call for “an immediate end of forced organ harvesting from Falun Gong practitioners in China,” to initiate investigations that will lead to the prosecution of those responsible for this crime against humanity and to call upon the Chinese government to end the persecution of Falun Gong.

In a one and one-half hour meeting in a conference room in the U.N.’s Motta Building, Torsten Trey, M.D., executive director of Doctors Against Forced Organ Harvesting (DAFOH), along with three doctors and three lawyers from six countries and three continents, presented a letter for the high commissioner and briefed the high commissioner’s staff on the forced organ harvesting taking place in China.

In a phone conversation, Torsten Trey explained how the petition got started. The members of DAFOH were frustrated, Trey said. They knew an atrocity was taking place in China, but governments and professional and human rights organizations had often been slow to react.

The DAFOH members thought that if people were asked directly, they would respond. In June DAFOH reached out to a few supporters to start collecting signatures for a petition. The signature collection started in earnest in July.

The petition took off. The more people heard about the organ harvesting taking place in China, the more volunteers and organizations wanted to help gather signatures, in more places around the world. Like the proverbial snowball rolling downhill, the petition rapidly started getting bigger.

Zek Halu, a real estate developer in his mid-60s, would show up in London’s Chinatown with two clipboards under each arm, one in his hands, and pens sticking out of his pockets.

On the weekends, the streets of Chinatown are thronged with people, mostly European tourists. Halu would plunge into a group and find one person who wanted to sign. “Soon, everyone wants to sign, and then the clipboards with the petitions start getting tossed around in the crowd from one to the other. One can’t keep up.”

Also collecting signatures in London’s Chinatown was a couple in their sixties from mainland China each of whom had been tortured in mainland China for their belief in Falun Gong. Without speaking any more English than “please sign” and “petition,” they would collect signatures every day.

“Their faces are so kind,” Halu said, “People want to do whatever they ask.”

In fact, formidable, elderly Chinese practitioners of Falun Gong with limited English skills collected signatures in major cities all over the world. In Toronto, the 75-year-old Ms. Li Jiayu collected 8,000 signatures from July through November.

In Switzerland, the Swiss chapter of the human rights organization International Society for Human Rights organized the signature collection.

Silvan Fedier, a 40-year-old educator, headed up the project for the society. “Individuals from churches would simply pick up a petition somewhere without our knowing and take it to their church,” Fedier said in an email, “And then they would send us the filled-out signature sheets.”

In Korea, tables at which doctors could sign the organ harvesting petition were set up at 18 different meetings of medical societies; 7,000 doctors signed.

While people were willing, most had not heard of the forced organ harvesting before and were not prepared for what the volunteers had to tell them.

“80 to 90 percent were disgusted,” said Thanh Le a retired manager for Los Angeles County in California. “They couldn’t believe it. ‘This is the most inhumane thing,’ they would say.”

Toronto’s Ms. Zhou Chuanying said through an interpreter, “What impressed me the most was how many people’s faces were shocked after they read the petition letter. With some, their eyes reddened. With others, there were tears on their cheeks.”

The information in the petition letter first came to the world’s attention in March 2006, after an investigative reporter for a Japanese TV station and the wife of an eye surgeon fled the country for the United States, where they told a gruesome story.

They provided credible details about a camp near a hospital in northeastern China in which Falun Gong practitioners were held as a kind of live organ bank. When the hospital needed an organ for transplantation, they would check the records of individuals in that camp, and if one matched, pluck that person out and harvest all of his or her salable organs, killing the practitioner in the process.

In the report Bloody Harvest (released in July 2006 and since published as a revised report and then a book), they concluded the allegations were true. They estimated that in the years 2000–2005, Falun Gong practitioners had provided organs for 41,500 transplantations.

Among other pieces of evidence, Kilgour and Matas pointed to the following: unexplained blood tests and medical exams given to detained Falun Gong practitioners, but not to other prisoners; phone admissions by doctors in China in 2006 that they had or could get access to “fresh organs” from Falun Gong practitioners; the way in which the number of transplants done in China shot upward after the persecution of Falun Gong began in China; and the absence of any other source other than Falun Gong practitioners that could provide the organs for this rapid increase.

Bloody Harvest understands the forced organ harvesting from Falun Gong practitioners to be part of the persecution of Falun Gong launched by then-paramount leader Jiang Zemin in 1999.

Falun Gong involves practicing meditative exercises and seeking to become a better person by living according to the principles of truthfulness, compassion, and tolerance. After first being publicly taught in 1992, it rapidly became very popular. According to official Chinese state reports at the time, at least 70 million people had taken up the practice. Practitioners say the true number was over 100 million.

Jiang feared how popular Falun Gong had become—more were practicing it than were members of the Chinese Communist Party. He also feared that the traditional moral teachings of Falun Gong would erode the authority of the Communist Party’s atheist ideology.

David Matas is well-positioned to gauge how the public is responding to the forced organ harvesting taking place in China. In an email, Matas wrote that he had traveled “almost continuously” for more than seven years—since completing Bloody Harvest in July 2006—meeting with groups and politicians to tell them about these crimes against humanity.

He wrote that when he returns to a location after time has lapsed, he can see that awareness of organ harvesting, and activism opposing it, has increased, with more concern at higher levels of society. “The story of organ transplant abuse in China has, over the years, spread wider, higher, and deeper,” Matas wrote.

“There is a gathering global momentum finally to set in place the mechanisms to prevent the transplant abuse we have seen and continue to see in China.” Matas wrote. “The petition both reflects and adds to the momentum.”

A state in Australia is considering legislation that would prohibit individuals from receiving organs harvested from unwilling victims. New legislation has been discussed in France. In Sweden recently, 20 MPs took part in a brainstorming session that discussed possible new legislation.

“Out of the Chinese Communist Party’s killing of Falun Gong for their organs will arise a global legacy, an ethical global organ transplantation system,” Matas wrote. “That legacy will survive long after the Communist Party of China is a bitter, distant memory.”