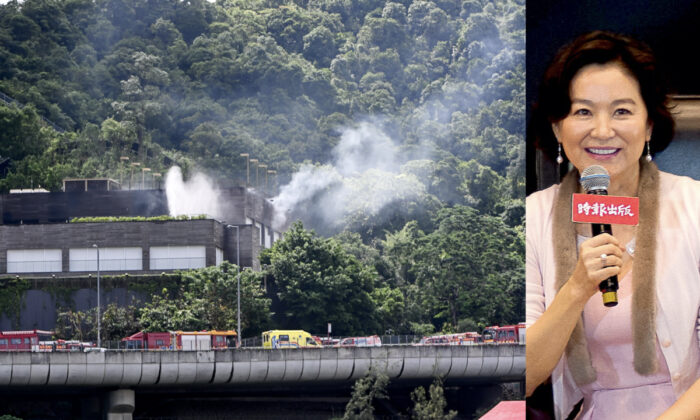 $1.4 Billion Mansion in Hong Kong in Flames for 8 Hours

At around midnight on July 7, 2022, a three-level, HK$11 billion (US$1.4 billion) mansion at No.9-11 Anderson Road, Kowloon Peak, Hong Kong caught on fire and it took firemen about 8 hours to quell the blaze.

Based on several posts on a Facebook group called “Hong Kong Emergency Report Group,” at about 01:43 a.m, the fire was so fierce that the Fire Department of Hong Kong raised the fire alarm to level three, which is classified “dangerous and with a tendency to spread.”

The detached house, also known as “The Mega Castle,” is owned by Taiwanese Mega movie star Brigitte Ling Tsing-hsia. Ling was not inside the house when the fire occurred.

About 20 employees, drivers and maids were evacuated with pets, and were escorted by two vehicles to leave the scene to safety. No injuries have been reported so far.

After burning for almost eight hours, the fire finally diminished at about 8:30 a.m.

As of writing this report, Hong Kong Fire Department is still trying to lower the temperature on site.

Front-line fire support vehicles “Rest 15” arrived at the scene for firefighters to rest and recharge, while their physical condition is being closely monitored.

Hong Kong Building Department personnel also arrived at the scene to inspect the structural safety of the mansion during the fire.

According to Hong Kong 01, firefighters used drones to detect fire sources at high altitude for the first time. The drones were also used to aid the rescue.