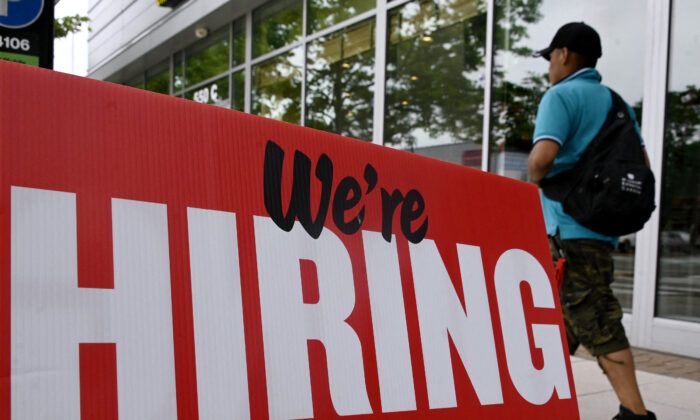 A man walks past a "We're Hiring" sign posted outside of a restaurant in Arlington, Va., on June 3, 2022. (Olivier Douliery/AFP via Getty Images)
Economy

The monthly U.S. jobs reports have topped market estimates many times this year, including the July and August non-farm payrolls reports, which showed 528,000 and 315,000 new jobs, respectively, higher than what many economists and analysts had initially projected.

White House officials have taken victory laps on the data, noting that these numbers are proof the economy is strong and that President Joe Biden’s policies are supporting post-pandemic growth.

But economists had questions about discrepancies between Bureau of Labor Statistics (BLS) data and the various labor-related numbers revealed throughout the month. Plus, why has the Federal Reserve’s quantitative tightening campaign failed to diminish labor demand?

Several experts may have determined what is causing better-than-expected labor numbers. The answer may have to do with double-counting.

The non-farm payrolls report contains the results of two surveys: the establishment survey and the household survey. The former measures employment, hours, and earnings through a sample of businesses. The latter gauges “the labor force status of the civilian noninstitutional population with demographic detail” using a sample of households.

The key difference between these two surveys is the methodology, since the establishment survey allows for double-counting. In other words, it will identify multiple jobholders for every position, meaning that a person with two jobs will count for two jobs. But the household survey will only consider an individual with two jobs as having one job.

BLS researchers also will count someone shifting to working for a company from self-employment as a new position, despite the lack of net gains in employment.

“There is considerable evidence that this double-counting has accelerated recently,” according to E.J. Antoni, a research fellow for regional economics at The Heritage Foundation’s Center for Data Analysis.

Of the 5.8 million jobs noted as recovered in the last year, roughly 1.3 million were the result of double-counting, Antoni’s research found. In the August numbers, double-counting accounted for 208,000 jobs.

“Over the last year, a disproportionate number of people have taken second (or third) jobs and switched from self-employment to working for other businesses,” he told The Epoch Times. “These changes in employment do not actually change the number of people with jobs, but they boost the headline jobs number from the establishment survey, one of two surveys which make up the monthly Employment Situation report from the Labor Department’s Bureau of Labor Statistics.”

How the figures are put together should prompt analysts to adopt “a holistic view on the monthly report” rather than the headline numbers, he added.

Last month, the total number of multiple jobholders was a seasonally adjusted 7.747 million, and self-employed workers fell to 9.629 million.

Moreover, other factors can distort the monthly labor report. For example, a common measurement is that if someone is out of work and fails to search for a job, he or she is described as having dropped out of the labor force, rather than being listed as unemployed.

What About Wage Growth?

Many have championed accelerated wage growth over the past 18 months. In August, average hourly earnings held steady at 5.2 percent year over year, hitting $32.36. But inflation has eaten away at those gains.

“The longer inflation and inflation expectations remain elevated, the higher and longer-lasting the pressures on wage growth are likely to be,” Oscar Jorda, a senior policy adviser in the Economic Research Department of the Federal Reserve, wrote in a recent paper.

According to the Survey of Consumer Expectations conducted by the Federal Reserve Bank of New York, one-year-ahead earnings growth expectations have remained little changed, at 3 percent, since December 2021. In addition, consumer inflation expectations over the next year eased to 5.7 percent in August, after potentially peaking at 6.8 percent in June.