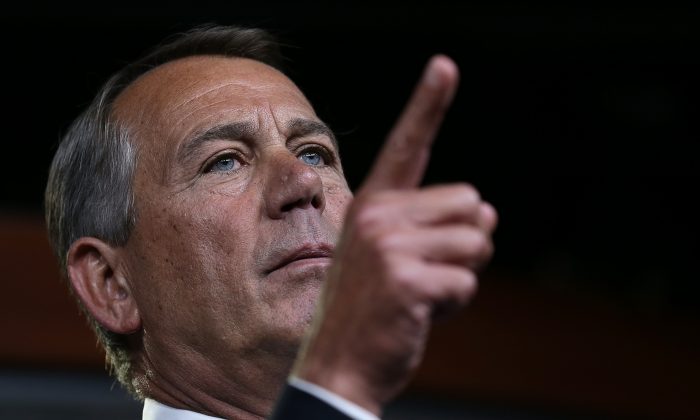 U.S. Speaker of the House John Boehner (R-Ohio) answers questions relating to the continued funding of the federal government during his weekly press conference on December 4, in Washington, D.C.(Win McNamee/Getty Images)
US

The $1.1 trillion spending bill unveiled late Tuesday has sparked heated criticism from both liberals and conservatives as lawmakers prepare to pass the bill on Dec. 11 to avoid a government shutdown.

Instead of providing interim funding, the comprehensive legislation was really 11 separate bills in one, meant to assure operations through the Sept. 30 end of the budget year. It was stocked with policy provisions sought by one party or the other.

Both Democrats and Republicans have complained that the release of the omnibus bill less than two days from a much-needed vote doesn’t give the public enough time to scrutinize the 1,603-page bill in its entirety. Legislators said it is riddled with provisions for special interests.

“Now the House of Representatives is about to show us the worst of government for the rich and powerful,” Sen. Elizabeth Warren, (D-Mass.) said on Wednesday. “The House is about to vote a budget deal, a deal negotiated behind closed doors, that slips in a proviso that would allow derivative traders on Wall Street to gamble with taxpayer money and get bailed out by the government when their risky bets threaten to blow up the financial system.”

Campaign finance reform groups have harshly rebuked the bill for loosening caps on contributions to the national political party’s committees. Democracy 21 said that if the bill passed, it would include “the most corrupting campaign finance provisions ever” signed into law.

“The legislation massively increases the limits on individual contributions to a party by allowing a single individual to contribute to each national party’s three committees a total of $777,600 per year or $1,555,200 per two-year election cycle,” Democracy 21 said in a letter sent to lawmakers.

The Republican leadership in the House is committed to the bill, and Appropriations Committee Chair Hal Rogers (R-Ky.) said the bill “reflects conservative priorities,” a claim disputed by some Republicans and conservative advocacy groups because the bill would fund president Obama’s executive order on immigration.

“I will do everything in my power to defend the Constitution and deny funds for executive amnesty,” Rep. Jim Bridenstine (R-Okla.) said on Twitter Wednesday.

Conservatives have called for Republican lawmakers to defund the immigration order, which would shield 5 million illegal immigrants from deportation, by attaching “riders” forbidding its implementation to the omnibus bill, but high-ranking Republicans in the House oppose doing so.

The Appropriations Committee had previously claimed that it was impossible to defund the immigration order, but the Congressional Research Service said otherwise, and the omnibus bill has hundreds of other riders in other areas.

House Republicans have expressed their opposition to the immigration order, and passed a separate bill last week to defund the order, but observers said it was a token gesture meant to placate Republican voters because the bill would never pass the Senate. Next year’s Senate will have a Republican majority, but this year’s still has a Democratic majority.

The omnibus bill would fund the Department of Homeland Security until March, when House Republicans leaders said they will take up measures to defund the immigration order, but some conservatives argue that Republicans would have less leverage to defund the order by then.

The bill would provide a full year of funding for other departments, some of which would aid the immigration order, conservatives said.

“Not only does this budget fail to defund amnesty, it actually helps accelerate Obama’s unconstitutional executive order,” Daniel Horowitz wrote in the Conservative Review. “The bill contains almost $1 billion in additional funding for Health & Human Services (HHS) so that the recent illegal immigrants from Central America can establish themselves in the country.”