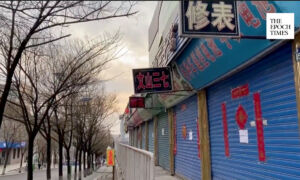 Half of all Restaurants in Northeast Chinese Cities Close, Remaining Half Operate At A Loss
0
Share Now
TelegramFacebookTweetEmailTellMeWeReddit
Copy Link
Short Videos

The two annual political plenary sessions of the communist regime began on May 21 in Beijing. In past years, the meetings were held in early March. This year, they were postponed to May due to the CCP virus outbreak.

On May 21, Beijing’s sky suddenly turned black, along with lightning bolts and heavy hail.

The video shows Beijing at 3 p.m. when the day suddenly turned dark along with thunder, lightning, and heavy rain on May 21, 2020.

Man says: “Beijing, at 4 o’clock in the afternoon.”

In the afternoon of May 21, the hail struck Beijing.

A netizen commented, “Even heaven says this is the darkest tyranny in human history.”

There’s also a netizen who made a comparison to the day on May 20 when Taiwanese president Tsai was sworn in for a second term: “On the day President Tsai Ing-wen was inaugurated, a typhoon that was about to land had disappeared, and even the rainy season had stopped.
Like magic! It didn’t rain in Taipei!
Today, there are two meetings in Beijing.
Beijing should display typical fine spring weather at this time of year.
Instead, it was dark as the night, and hail attacks…
This is God’s might!”