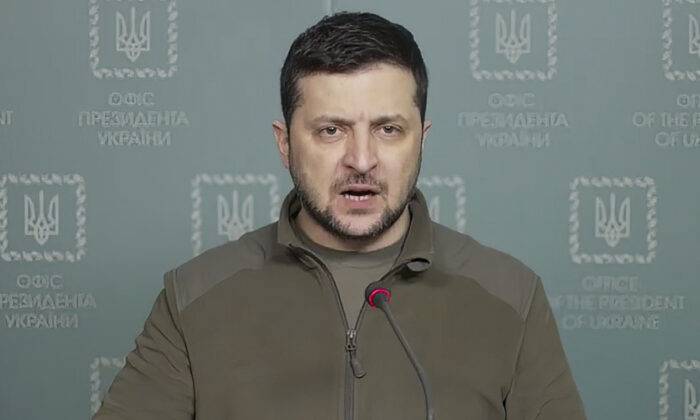 Ukrainian President Volodymyr Zelensky said on March 16 that World War III may have already started amid the Russia–Ukraine conflict.

When asked by NBC anchor Lester Holt about whether he believes a third world war has started, Zelensky responded, “Nobody knows.”

“Nobody knows whether [World War III] may have already started,” Zelensky told Holt, without elaborating. “And what is the possibility of this war if Ukraine will fall? It’s very hard to say.

“We’ve seen this 80 years ago when the Second World War had started. … Nobody would be able to predict when the full-scale war would start,” Zelensky said, claiming that the current conflict puts the “whole civilization at stake.”

The invocation of World War III has become increasingly common since the start of the Feb. 24 invasion, by both Russia and the West. Last week, President Joe Biden warned that getting directly involved in the current conflict by either enforcing a no-fly zone or sending troops to Ukraine would escalate the conflict between NATO and Russia.

“We will not fight a war against Russia in Ukraine. Direct conflict between NATO and Russia is World War III, something we must strive to prevent,” Biden said in public comments on March 11.

Russian Foreign Minister Sergei Lavrov said days before that a third world war would be “nuclear and destructive.” While both the United States and Russia possess vast quantities of nuclear weapons with numerous different delivery methods, both generally adhere to the nuclear military doctrine of “mutually assured destruction.”

Earlier on March 16, in a speech to Congress, Zelensky called on the United States to provide fighter planes, surface-to-air missiles, and enforce a no-fly zone. White House officials reiterated that there are no plans to create a no-fly zone over Ukraine.

White House press secretary Jen Psaki told reporters on March 16 that the Biden administration has determined that there’s “not a difference” between a no-fly zone that would shut down all airspace over Ukraine and a so-called humanitarian no-fly zone. Both could escalate the conflict with Russia, she said.

Psaki also cited a Pentagon assessment that found that allowing for the transfer of fighter jets to Ukraine could also be viewed by Russia as an escalation. Previously, there was confusion after Polish government officials announced earlier in March that they would send MiG-29 planes to a U.S. air base in Germany to be transferred to Ukraine, a plan that the Pentagon rejected.

About 3 million people have fled Ukraine since the conflict started, according to United Nations officials. Ukrainian authorities, meanwhile, estimate that thousands of people have died so far.