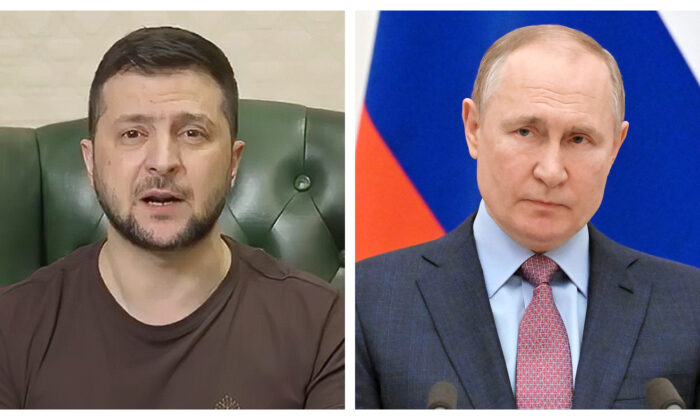 Zelensky Calls for Direct Talks With Putin, Says Ukrainians Must Vote on Terms of Peace Deal

Ukraine’s President Volodymyr Zelensky has called for direct talks with Russia’s President Vladimir Putin, saying such a meeting is needed to understand Putin’s conditions for ending the war.

Russia and Ukraine have held several rounds of talks by way of video conferencing, but so far without any significant breakthroughs. Zelensky said direct talks are now needed with his Russian counterpart “in any format” in order to understand the conditions for putting an end to hostilities.

“This is a very difficult situation for everyone. For Crimea, Donbass, and for everyone. In order to find a way out, you have to take this first step, which I have mentioned: security guarantees, the end of the war,” he said.

Putin calls the invasion of Ukraine a “special military operation” meant to “demilitarize and de-Nazify” Ukraine, claiming the operation seeks to protect people with Russian roots from “genocide” in separatist controlled regions in eastern Ukraine, while insisting Russia has no intention of occupying Ukrainian territories.

Western allies reject Putin’s characterization of the conflict as a pretext to wage an unprovoked, unlawful, and groundless war meant to satisfy Russia’s expansionist agenda in the region.

Separately, Zelensky told Ukrainian news outlet Suspilne that any deal agreed with Russia would have to be put to a referendum in Ukraine.

“The people will have to weigh in,” Zelensky said. Since some of the terms of a peace deal could be “historic” in significance, “we will come back to a referendum,” he added.

The Ukrainian president reiterated his willingness to forego plans for NATO membership but insisted on security guarantees for his country, including from NATO countries.

A key Moscow demand is that Ukraine declare neutrality and not join any military alliances.

Ukraine insists on concrete, enforceable security guarantees, unlike the soft pledges to ensure its territorial integrity made jointly by the United States, Great Britain, and Russia under the 1994 Budapest memorandum in exchange for Ukraine giving up its nuclear arsenal.

Zelensky said in a video address that on Monday, eight humanitarian corridors worked and over 8,000 people were evacuated along the routes.

“Thank you to everyone who did it, who worked for the people,” he said.

Ukraine’s Deputy Prime Minister Iryna Vereshchuk said on Tuesday that efforts to evacuate civilians from besieged towns and cities were focused on the city of Mariupol but did not announce any new agreement with Russia to allow safe passage for trapped residents.