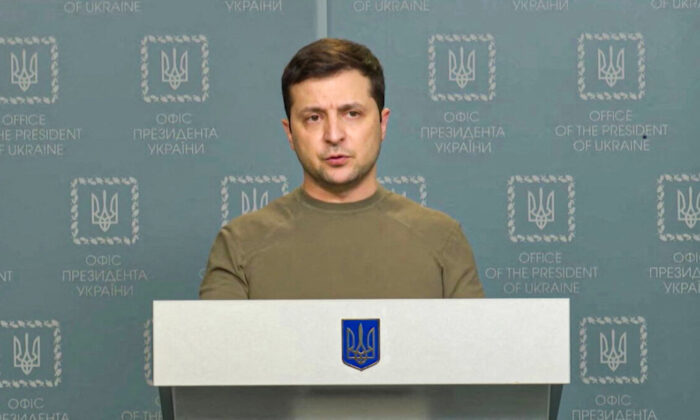 Ukraine President Volodymyr Zelensky announced a measure that bans 11 opposition political parties, alleging they have ties to Russia, he announced in a Telegram video posted on March 20.

“Any activity of politicians aimed at splitting or collaborating will not succeed,” he said.

Zelensky also said that “wartime exposes quite well the paucity of personal ambitions of those who try to put their own ambitions” or “their own party or career above the interests of the state,” according to a translation.

The Ukrainian Ministry of Justice has been told to immediately take measures to ban those political parties, he said. Zelensky didn’t provide evidence that linked the 11 opposition parties to the Russian government.

At the onset of the Feb. 24 invasion, Zelensky signed a measure that established martial law and general mobilization.

Zelensky said on March 20 that “activities by politicians aimed at discord and collaboration will not succeed,” adding that alleged links between Russia and “some political structures, the activities of a number of political parties are suspended for the period of the martial law.”

The president also signed a decree that would combine all national TV channels into one platform, citing the martial law provision.

During an interview with CNN, Zelensky said he’s ready for talks with Russian President Vladimir Putin and claimed that should negotiations fail, it would lead to an escalation of the conflict.

“I think we have to use any format, any chance in order to have a possibility of negotiating, possibility of talking to Putin. But if these attempts fail, that would mean that this is a third World War,” he told the network on March 20.

In Mariupol, which has suffered some of the heaviest bombardment since the start of the invasion, many of its 400,000 residents remain trapped in the city with little if any food, water, and power, officials said. Fighting continued inside the city on March 20, regional governor Pavlo Kyrylenko said, without elaborating.

The city council said on its Telegram channel late on March 19 that several thousand residents had been “deported” to Russia over the past week. Russian news agencies said buses had carried hundreds of people that Moscow calls refugees to Russia from Mariupol in recent days.