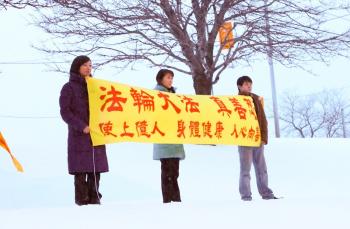 By He Yu
Print
Some say that modern Chinese people do not have their own films because China is a country where a few people dictate what is right for the 1.3 billion to say, know, and think.

This was probably true until the release of Encirclement, a film based on the persecution of Falun Gong, produced by overseas Chinese of the Canada-based Yuanju Productions Corporation.

Encirclement, or Weijiao in Chinese, tells the story of an overseas Chinese Falun Gong practitioner who sues a Chinese diplomat for libel. Another young Chinese diplomat is assigned to handle the case after he arrives at his new post in North America.

During his operation to “track down and encircle” Falun Gong practitioners, the young diplomat comes in close contact with them. He is shocked by his discoveries of information that is hidden from most people in China.

The film is based in part on the experiences of former senior Chinese diplomat Yonglin Chen, who defected from his post at the Sydney Consulate in 2005 and asked for political asylum in Australia.

Chen revealed details of how Chinese Embassy and consular officials are ordered to spy on and interfere with overseas Falun Gong practitioners.

Major scenes are dramatizations of actual events, such as practitioners inside China tortured to death at the hands of the Chinese state, and Chinese high-level officials being served subpoenas by courts around the world.

“We have brought the real stories around us to the screen,” said Ye.

The persecution of Falun Gong is a human tragedy of unprecedented proportions that has continued for more than a decade. Thousands are confirmed to have died from torture, hundreds of thousands have been unlawfully detained and sentenced to forced labor and prison, and hundreds of millions have been persecuted in various ways.

Large-scale organ harvesting from detained Falun Gong practitioners, conducted in collaboration with the Chinese military, law enforcement, and hospital systems has been alleged.

These stories have been painstakingly hidden from the public inside and outside China, but are part of the sinister legacy of communism in China.

“Encirclement is about hope,” Ye said. “What comes through is the sense of humanity and the unaffected performance that resonates with the audience.”

Ye said he hopes the film can be seen by many people, especially Chinese. “I believe most Chinese people, including government officials, do have a conscience,” he said. “Once they learn the truth, they will choose the right path.”

“Encirclement” premiered May 13 at Toronto’s Empire Theater. It is in Chinese with English subtitles.