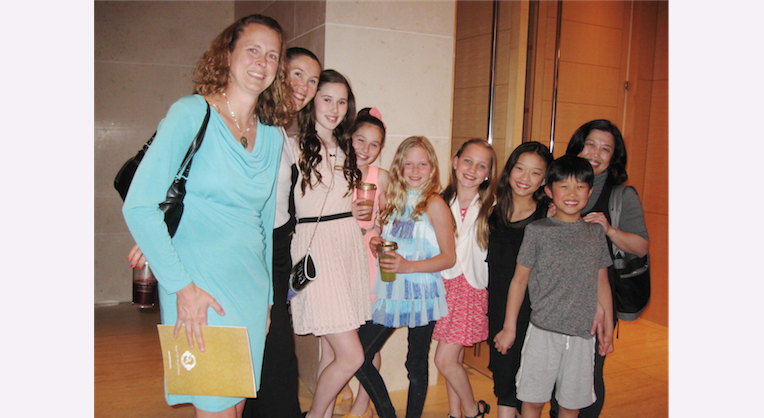 Five girls and one boy studying dancing and four moms were in awe of the dancers in Shen Yun Performing Arts, at the Overture Center for the Arts, on April 10. (Cat Rooney/Epoch Times)
Shen Yun

MADISON, Wis.—On the warm spring night of April 10, a group of young dancers and gymnasts had the chance to see Shen Yun Performing Arts at Madison’s Overture Center for the Arts.

Five girls, a boy, and four moms came, representing different dance schools and from all over the Madison area. The enthusiastic girls felt amazed by the classical Chinese dance and music program, particularly the dance.

Shen Yun specializes in classical Chinese dance, which, alongside ballet, is one of the most rigorous and comprehensive dances systems in the world, Shen Yun’s website says.

Elise Wollfhin, who studies classical ballet at Madison Ballet, thought the performance was wonderful. In fact, she sounded a bit envious that classical Chinese dance combines the classical dance with technically demanding flips, leaps and spins. “They get to do all this cool, new, interesting stuff, spins and things that I never got to experience,” she said.

Another feature of classical Chinese dance is its expressiveness. In fact, through this dance form, Shen Yun is able to tell of China’s legends and myths.

Mom Stephanie Wollfhin, a speech teacher, called the performance “visually stunning,” and noted the colors and costuming. She also singled out a particular dance that she enjoyed—about a boy who was born a meatball and had miraculous powers.

MacKenzie’s mom, Josie Banker, a lawyer, also attended the performance. “I think it’s very interesting and amazing—very talented dancers,” she said and then expressed her delight in having had the opportunity to see something like Shen Yun.