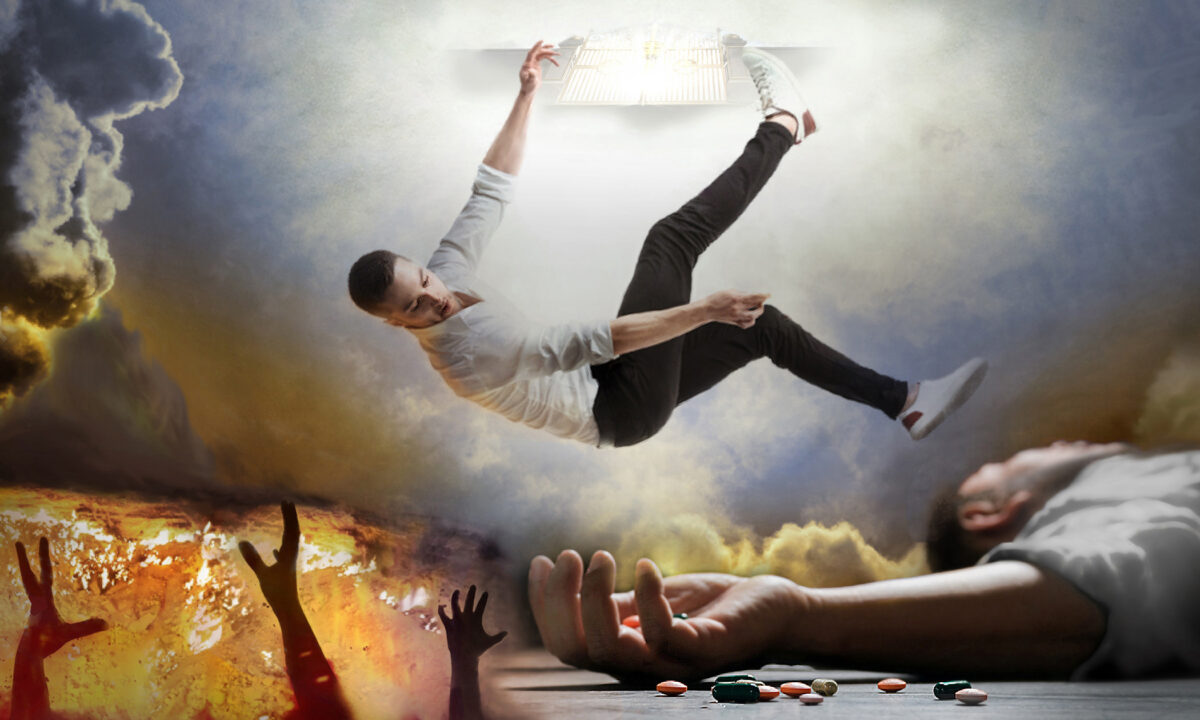 Young Criminal Attempts Suicide, Leaves His Body, Enters ‘Hell’—And Is Shown the Errors of His Ways

When he was 19 years old, Jeffrey C. attempted suicide after finding out his girlfriend was cheating on him with his best friend. After he swallowed a lot of pills, his mother realized what had happened and called an ambulance.

Jeffrey hadn’t been a model citizen, but his experience of nearly dying was pivotal in mending his ways.

He recalled seeing the afterlife.

Seeming to exit his body, Jeffrey saw a doctor standing over him, he stated in an article on the Near-Death Experience Research Foundation’s website. He found he was able to enter the doctor’s body and could read his mind.

“I went into him and saw images of his wife, kids, and his car. I felt the panic in him,” Jeffrey recalled.

A spirit being took his hand and pulled him away. He could see his own body and a doctor and nurse working to revive him. The being took him into a “column of light.” At first, he was in a place that he thought was heaven, with cloud-like walls. There he saw his grandmother.

Then suddenly, he was in a foul-smelling field with people who had jackal faces. A demonic creature grabbed him and brought him to a place with a bunch of cubes stacked up.

The demonic creature told him that each person gets a custom-made hell.

“He told me this was hell, and in every cube was a custom-made hell for every soul,” Jeffrey said. “He explained that people adapt to every kind of hell, and some people are more tolerant of some things than others, so hell is ever changing. He took great joy out of watching people suffer.”

Jeffrey was sucked into one of the cubes, where people fed him rank food and laughed. Then he was shown flashes of all the bad things he had ever done.

“I was being put into other people’s shoes as I was doing bad things to them,” he said.

“I could see how insensitive I was to people and didn’t even know it. It was excruciating and overwhelming to relive things that I had forgotten about, or just didn’t care about. I was made to feel the way I made others feel.”

Then he was kneeling in a cave, with other people around him also kneeling.

“I saw a girl kneeling with her wrists cut, a man with a rope around his neck, and another with the back of his head blown out,” Jeffrey said. “I could hear screaming from the cave ahead, and I was trying to get one of these people to talk to me and tell me where I was. One of them told me to be quiet or I would be next. Then a huge, ugly demon reached out of the cave, grabbed them, and dragged them into the cave.”

When he closed his eyes, he was suddenly overwhelmed again by the visions of the bad things he had done. He realized that’s why everyone there was wide-eyed, because they would also experience these visions if they closed their eyes.

“You cannot close your eyes. You cannot talk to the others,” Jeffrey said. “You cannot stand up. You cannot sit down. You can only kneel there on the tips of your toes and the points of your knees. All you could do was stare at the hole of fire, listen to the screams, and hope you are not next.”

But there was still hope.

“After a long time, my eyes began to burn so badly, I finally decided that it was worth it to put up with the bad flashes if I could just close my eyes for a while,” he said. “I began to sob quietly as the flashes of my evil ways rushed in, and I heard a voice. It said, ‘If you ask him, maybe he will save you.’”

He was brought before a spiritual being who asked what brought him there. Jeffrey replied that the world is not fair and he didn’t want to be a part of it anymore.

He realized his life has meaning.

The being explained that Jeffrey had begged to be born into the material world, and had even chosen when and to whom he would be born.

He revealed also that Jeffrey had been saved when he asked for it, because he still had a spark of belief.

“My belief means way more than I had ever realized,” Jeffrey said. “He saw something in me that even I did not see. I began to weep so badly that I was frozen there on the floor with my head in my hands and crying uncontrollably.”

He was then shown future events, including how he would break his back and how that would impact him. These things later came true.

He was told that he had chosen these things for a reason before he was born, aware of the consequences, and he must return to finish them. He didn’t want to go back, but as he returned to his body he felt comfort and peace from God.

He remained in a coma for three days, though his mind was aware. He thought over all the details of his experience while he lay there incapacitated. When he came out of the coma, a nurse disclosed that he had died and been revived.

“I was an alcoholic drug dealer who had become a thug,” he said. But he turned his life around. He no longer fears death—even after his hellish experience—because of his overarching, peaceful connection to the divine.

The future events he’d foreseen during his near-death experience (NDE) came to pass, like puzzle pieces falling into place.

“I knew it was real because it was more vivid than any dream,” he said. “No dream or illusion could have given me such a puzzle that puts itself together with each year that goes by and still form such a perfect picture.

“You see the picture had to be formed before the puzzle was cut into pieces. Each piece of it was designed to be found and placed right, when it was needed and relevant. That is significant.”

He shared what he had learned about life’s challenges: “[They] are what give us experience and sometimes things are thrown in our way to change the timing of events. A flat tire on the freeway may seem like a problem but may have helped you avoid an accident down the road.”

Other NDEers have reported seeing scenes not unlike what Jeffrey had seen.

Many aspects of Jeffrey’s NDE are common among NDEers. NDE researcher Dr. Jan Holden, while giving a lecture to present her book “The Handbook of Near-Death Experiences,” told the story of another man who’d attempted suicide.

The man reported that he found himself free-falling through space, landing on a clay-like surface. When he landed, he shattered into several versions of himself.

He, like Jeffrey, found himself on the receiving end of all the bad things he had done to others.

One of him was wailing in distress. Two others were encountering people in his past, reviewing his life. The man experienced being on the receiving end of his actions. It wasn’t necessarily about the important people in his life either. One of them was a stranger he had been nasty to in a grocery store one day.

Others of him were experiencing the near future, such as seeing his mother getting the call about his suicide. He saw also the distant future. His daughter was an infant at the time of this suicide attempt. He saw her on her graduation day crying because her father wasn’t there.

Another of him was crying out for salvation. A hand picked that one up, and all the other versions of him rose with it. A spiritual being told him he had to go back, that he still had things to do. Now he is the CEO of a nonprofit to prevent suicide.