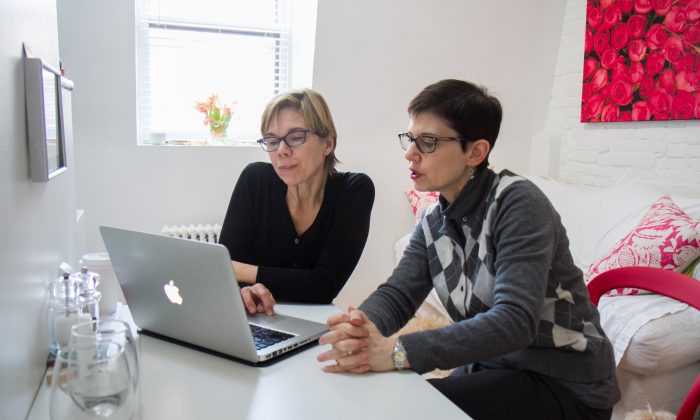 NEW YORK—Midafternoon rays seeped through a skylight and lit a pristine apartment in Park Slope, where two women laughed and chatted intermittently about their children and ex-husbands. Liz Gessner was not home with her best friend that afternoon. She was sorting financial records with her professional organizer.

When one thinks of people who hire professional organizers, extreme hoarders from reality television shows may come to mind.

Yet Gessner’s apartment was already uncluttered and exceptionally clean: White wooly rug, white couch, and bathroom towels that were of the same shade of impeccable white.

Yet since the founding of the National Association of Professional Organizers (NAPO) in 1983, professional organizers have branched out beyond the removal of physical clutter, although they can help with that as well.

Gessner and her professional organizer Sharon Lowenheim go from discussing how to organize digital financial records to telling stories about disastrous social situations.

It’s therapy, more than anything.
— Liz Gessner, a writer who hired a professional organizer

When people discuss personal problems with their organizers, genuine friendships tend to form. Some of Lowenheim’s clients come see her plays at St. Jean’s Players, a community theater that she also directs.

Mental Clutter Is Clutter, Too

In this digital age when people are overwhelmed with not only more information but also more opportunities, the mental and emotional clutter can be more substantial than physical clutter. The role of the professional organizer has adapted to this need.

“You don’t necessarily know how to disentangle yourself from your obligation overload, opportunity overload, and information overload,” said Andrew Mellen, an award-winning playwright turned professional organizer.

You don’t necessarily know how to disentangle yourself from your obligation overload, opportunity overload, and information overload.
— Andrew Mellen, professional organizer

“It’s about helping you make strategic choices about things that are important for you,” he said.

Sometimes Lowenheim just talks with a client for three hours. “It’s about purging and gaining clarity on all different levels,” she said.

She and Gessner met in 2011, when Gessner needed to clean her basement. She found Lowenheim by searching for a professional organizer online.

Since then they have met a couple times a year, working on projects varying from organizing closets to downsizing after her children left for college and her partner passed away.

Perhaps most important, she said, was how Lowenheim helped her plan a routine in her new life that allows her to her balance her responsibilities as a mother, yoga instructor, and college applications writing coach, and still have a designated time to work on her memoir and poetry.

“It’s interesting how it has evolved from the basement to all these different aspects of my life,” Gessner said.

Keep the Stories, Not the Objects

Although Mellen has spent a good deal of time organizing kitchen cupboards, he said an important part of professional organizing is about listening to and making sense of the human stories behind the memorabilia.

An important part of professional organizing is about listening to and making sense of the human stories behind the memorabilia.

A space is often messy because it is stuffed with too many objects that one does not need: a teacup from childhood, a sweater from a former lover.

“I meet people who have been stuck for years with physical clutter, or psychological, spiritual, emotional clutter,” Mellen said.

He said one of his clients was holding on to a suit that her ex-husband gave her. It was an expensive suit. But it did not fit her, and it reminded her of a failed relationship.

She realized that she did not like the story behind the suit, and was able to let it go afterward.

“Once they’ve identified the stories, the story is separated from the stuff,” he said. “That means the stuff can leave.”

Who Are Professional Organizers?

When Mellen was co-producing an awards ceremony at the Kennedy Center in 1996, he met a Nobel Peace Prize laureate, and that led to him organizing his awards photos for him. He was then offered a job to be his photo organizer.

That job never materialized because the Nobel Peace Prize laureate—who Mellen does not wish to name—became busy with traveling.

But Mellen told many of his friends about the job. People began showing up at his doorstep for organizing help. And that was the start of a career that led to him giving TEDx talks and helping the Department of Homeland Security organize.

Audrey Lavine was a Broadway star who left the limelight in 1988 to start a professional organizing company.

“I was one of the pioneers,” she said. Although NAPO has 4,000 members today, then there were not many professional organizers around or systems for training.

When Lavine was not singing on Broadway, professional organizing was her “survival job” in between shows.

Lavine was also a former president of the Board of Certification for Professional Organizers.

The price for hiring a professional organizer varies—from $25 per hour offers on Craigslist to $325 for a three-hour session—depending on the organizer’s experience and whether or not he or she is certified.

“I trust her with everything,” said Kitty Hawks, an interior designer who hired Lavine. “She makes the stuff that’s most unpleasant and painful a treat.”

She makes the stuff that’s most unpleasant and painful a treat.
— Kitty Hawks,  an interior designer who hired a professional organizer.

Lowenheim, Lavine, and Mellen are certified.

But fewer than 10 percent of professional organizers in NYC are certified—which requires an organizer to have spent at least 1,500 hours with clients over three years, and take an exam.

Lowenheim worked in management positions at large corporations such as Exxon Mobil Corp., Philip Morris International Inc., and Pfizer Inc. She became a professional organizer in 2006.

“My husband always jokes you didn’t need to get an MBA from Wharton to be an organizer,” she said.

For Lowenheim, one of the most important things is to leave a client with a strong sense of what to do next.

As Gessner and Lowenheim said their adieus to each other by the stairs, Gessner remarked suddenly, “I think I’m just going to work on taxes for the rest of the night.”