‘You Loot, We Shoot’: DeSantis Warns Criminals Not to Target Hurricane Victims 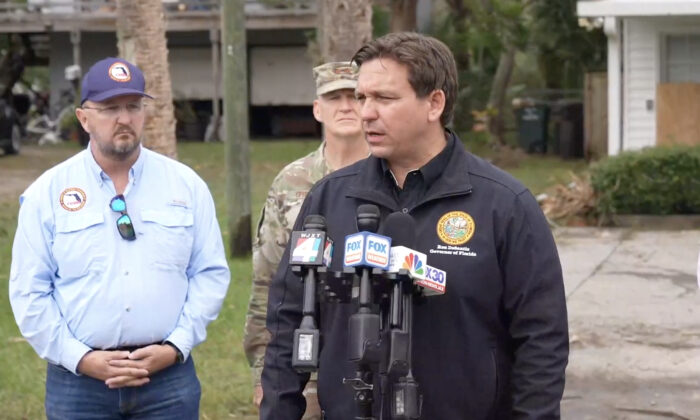 Florida Gov. Ron DeSantis has warned opportunistic thieves not to target residents or ransack homes in the wake of Hurricane Ian, telling a press conference that Floridians are well-aware of their Second Amendment rights while noting a boarded-up business sign reading “you loot, we shoot.”

DeSantis issued the stark warning during multiple press conferences on Friday, including one in Fort Myers, where he remarked about seeing the sign directed at would-be looters displayed at a business in nearby Punta Gorda.

“They boarded up all the businesses, and there are people that wrote on their plywood, ‘you loot, we shoot,’” DeSantis said. “At the end of the day, we are not going to allow lawlessness to take advantage of this situation.”

“We are a law-and-order state, and this is a law-and-order community, so do not think that you’re going to go take advantage of people who’ve suffered misfortune,” the governor added.

During a press conference in St. Augustine later in the day, DeSantis reminded reporters that Florida is a “Second Amendment state” and that thieves looking to ransack people’s homes should beware.

“You never know what may be lurking behind somebody’s home,” the Republican governor said starkly. “And I would not want to chance that if I were you—given that we’re a Second Amendment state.”

Florida has so-called “stand-your-ground” and “castle doctrine” laws on its books, which allow people who feel a reasonable threat of death or bodily injury or who confront home invaders to respond with force rather than retreat.

‘Florida Will Not Tolerate Looters’

In a post on Twitter, Florida’s Attorney General Ashley Moody shared a video showing a group of people being arrested for looting.

“Florida will not tolerate looters taking advantage of [Hurricane Ian] to prey on vulnerable Floridians. They will be arrested and I have asked state attorneys to seek the longest pretrial detention possible to keep them locked up so they cannot commit new crimes,” Moody said in a comment.

Separately, a senior Florida official warned that scammers and con artists often try to take advantage of desperate people following major natural disasters and called on residents to be vigilant in the wake of Hurricane Ian’s destruction.

“You have these predators that will come in, and they will go door-to-door canvassing neighborhoods that they see the damage and they will sign over their [insurance] claims to contractors or they will have unscrupulous public adjusters … that are going to damage your ability to get made whole any faster,” Florida Chief Financial Officer Jimmy Patronis told Newsmax Friday.

After natural disasters like Ian, bad actors “show up in droves,” Patronis warned. If you are a “policyholder” and suffered damage, “call your agent, call your carrier, or call my office,” he added.

“This will be the best way to ensure that your claim is being handled properly, and my office, we love handling people’s claims, we do a great job at it,” he continued.

Hurricane Ian made landfall near Sanibel Island and Fort Meyers on Wednesday as a powerful Category 4 storm with winds in excess of 150 mph.

Over 10 feet of storm surge inundated those areas, leveling entire neighborhoods and even destroying a large causeway bridge that connects Sanibel to the mainland, photos show.

The head of Florida’s Division of Emergency Management said Hurricane Ian left at least 21 people dead in the state, although that figure is expected to climb as search and rescue efforts continue.