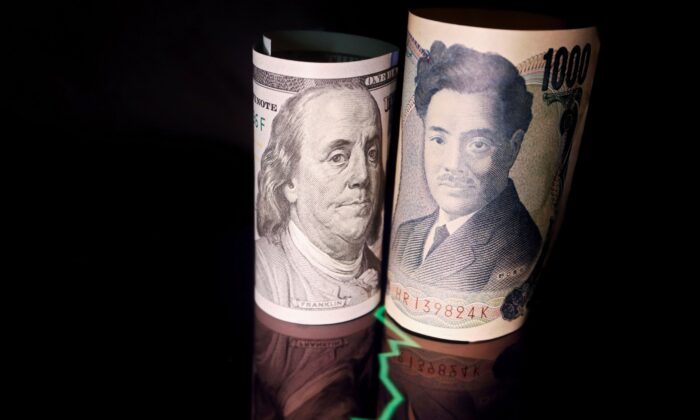 LONDON—Japan’s yen surged on Friday and is on track for its biggest weekly rise in four months against the dollar on bets that U.S. interest rates are nearing a peak after data showed the world’s biggest economy unexpectedly contracted in the June quarter.

Futures markets predict that U.S. interest rates will peak by December this year compared with June 2023 at the start of July and the Federal Reserve will cut interest rates by 50 bps next year to support slowing growth.

The upshot of this rapid drop in rate rise expectations has been a big driver for the dollar’s weakness against the yen with the greenback slumping nearly 2.5 percent versus the Japanese unit this week, its biggest weekly drop since late March.

Against the dollar, the yen climbed 0.8 percent on Friday to 133.17 yen to its highest levels since mid-June.

The yen was the primary short of the widening interest rate differential trade between the United States and its global peers with short yen bets, despite a recent pull back, above historical averages at $5.4 billion.

“The main trigger for the yen rebound has been the adjustment lower in U.S. yields reflecting narrowing expectations for policy divergence between the Fed and BoJ,” Mizuho strategists said in a daily note.

The gap between yields on 10-year U.S. Treasuries and equivalent Japanese government debt has narrowed by 70 bps since the beginning of June, as signs of slowing U.S. growth and interest rate rises, pushed Treasury yields lower.

The U.S. dollar was broadly a bit softer elsewhere on Friday, too, and the dollar index headed for a second straight weekly loss. It fell 0.5 percent to 105.680, its lowest since July 5.

But risk appetite was capped with the euro struggling to stay above the $1.02 levels on fears of a eurozone economy tipping into recession by the end of the year.

Safe-haven currencies including the Swiss franc were in demand on Friday.