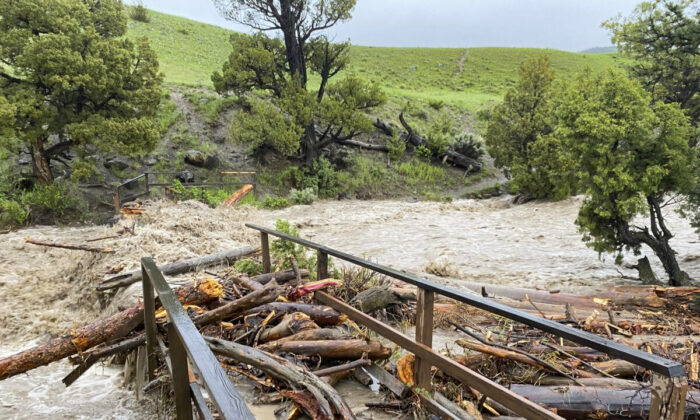 A washed out bridge from flooding at Rescue Creek in Yellowstone National Park, Mont., on June 13, 2022. (National Park Service via AP)
Regional News

Yellowstone officials claim a “thousand-year event” of extreme flooding as more than 10,000 visitors were ordered out of the nation’s oldest national park. The dramatic turn of natural events may forever alter Yellowstone’s terrain, along with that of surrounding communities.

Above-average rainfall, combined with sudden temperature spikes and a rapid melting of snow in the park’s higher elevations, caused the floods this week.

“Severe flooding due to unprecedented heavy rain on snow is forcing the closure and evacuation of Yellowstone National Park. Mudslides, rockslides and flooding are wiping out roads and bridges across the region,” said U.S. Stormwatch in a tweet.

“More than 10,000 visitors were ordered out of Yellowstone as unprecedented flooding tore through the northern half of the nation’s oldest national park, washing out bridges and roads and sweeping an employee bunkhouse miles downstream,” the Associated Press reported in a tweet.

“This isn’t my words, but I’ve heard this is a thousand-year event,” Yellowstone Superintendent Cam Sholly said in a press call Tuesday evening. “From what I understand, one of the highest cubic feet per second (CFS) ratings for the Yellowstone River recorded in the ‘90s was at 31,000 CFS, and Sunday night we were at 51,000 CFS.” Sholly noted that flooding events seem to be happening “more and more frequently.”

“With rapid snowmelt and recent heavy rains, communities in south-central Montana are experiencing severe flooding that is destroying homes, washing away roads and bridges, and leaving Montanans without power and water services,” Montana governor Greg Gianforte said as he declared a statewide disaster Tuesday. “Today’s disaster declaration will help impacted communities get back on their feet as soon as possible, and I have asked state agencies to bring their resources to bear in support of these communities.”

The northern portion of the park is likely to remain shut down for “a substantial length of time due to severely damaged, impacted infrastructure,” said a National Park Service news release, updated Tuesday evening.

Teams are assessing whether the southern loop can be re-opened, as it appears to be less impacted, but the southern loop closure “will extend minimally through next weekend (June 19)” according to the National Park Service. “Some type of temporary reservation system to prevent gridlock and reduce impacts on park infrastructure” will be implemented in the southern loop once it is safe to reopen.

There have been no injuries or deaths reported as a result of the flooding, as of now. The National Park Service is working alongside the park’s gateway communities to provide support to residents and visitors.

Although water levels may recede temporarily, the National Park Service warns that “additional flood events are possible through this weekend.”

Emergency crews are working to reopen roads and restore utilities in rural regions of Montana and Wyoming that were cut off due to the sudden flooding.

The park is approaching its peak tourism season, from mid-June to mid-September. Approximately 4.86 million visitors came to the park last year, an increase of over 27 percent from 2020’s 3.81 million. This is the first time in 30 years that Yellowstone has been forced to close its gates to visitors during the summertime.

Surrounding communities—already dealt an economic blow after the pandemic-related restrictions and shutdowns—were expecting a revival of tourism this year.

“The landscape literally and figuratively has changed dramatically in the last 36 hours,” Bill Berg, a commissioner in nearby Park County, told the Associated Press. “A little bit ironic that this spectacular landscape was created by violent geologic and hydrologic events, and it’s just not very handy when it happens while we’re all here settled on it.”