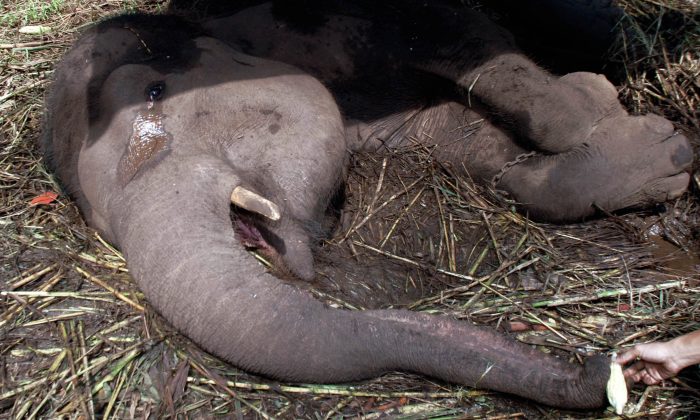 Lying on the ground with tears rolling down its cheeks, Yani the elephant became the latest animal to die in Bandung Zoo, which has been dubbed the “Death Zoo.” There animals languish in dirty, crowded cages.

The zookeepers had moved Yani from her enclosure to the ground before she died. Efforts to treat the animal, which had large sores on its body, were hampered by the fact that the zoo doesn’t have a resident veterinarian.

An investigation into the cause of Yani’s death is pending, but a spokesperson for the zoo said that they had consulted outside veterinarians.

The derelict conditions of the Bandung zoo has been a lightning rod for criticism by animal rights activists, and even politicians.

The mayor visited the elephant before it died.

“If they don’t have the budget to manage (the zoo), they should seek support,” said Bandun mayor Ridwan Kamil, the Daily Mail reports.

Yani is the latest in a string of unexplained deaths suffered by animals at the Bandun zoo. Last month, a rare Sumatran tiger unexpectedly passed away, and in 2014 a giraffe was found dead in its cage, with 40 pounds of plastic found in its stomach; trash thrown in by visitors.

“They need to make an effort to ease the overpopulation of animals,” said Petrus Riski of the Indonesia Wildlife Communication Forum, the New Zealand Herald reports. “It can be done by sending them to other conservation institutes.”

The bureaucrats in charge of the zoo have complained that lack of funding is responsible for the overcrowding problem.