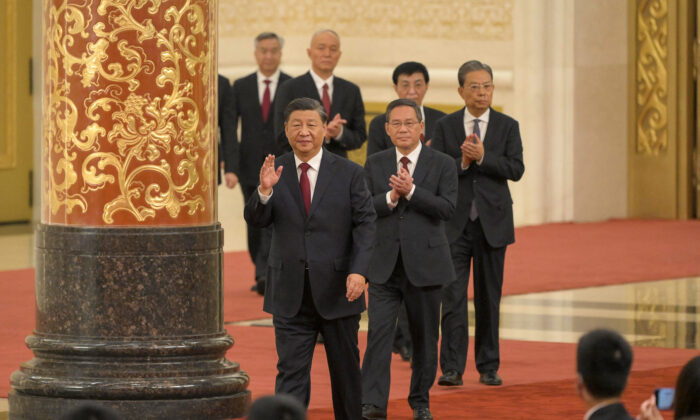 China's leader Xi Jinping (front) walks with members of the Chinese Communist Party's new Politburo Standing Committee, the nation's top decision-making body, as they meet the media in the Great Hall of the People in Beijing on Oct. 23, 2022. (Wang Zhao/AFP via Getty Images)
By Frank Fang

Chinese leader Xi Jinping will remain in power for an unprecedented third five-year term, breaking a two-term norm set by his predecessors.

Xi, 69, will be the general secretary of the Chinese Communist Party (CCP) until at least 2028.

Second in the Politburo Standing Committee’s ranking order is Li Qiang, 63, who is currently the Party secretary of Shanghai. Li is expected to be named as the Chinese regime’s premier next March, replacing current Premier Li Keqiang.

Li Qiang is a close ally of Xi. From 2004 to 2007, Li Qiang answered directly to Xi as his chief of staff in Zhejiang Province’s Party committee. With Xi as CCP leader, Li Qiang was promoted to Party secretary of Shanghai in 2017, where he imposed harsh COVID-19 lockdowns during the outbreaks earlier this year.

Third in the Party rank is Zhao Leji, 65, who currently leads the Central Commission for Discipline Inspection, the regime’s anti-corruption body. Next in line is Wang Huning, 67, a well-known Party theorist who is now heading for his second five-year term as a member of the Politburo Standing Committee.

The announcement of Xi securing another five-year term wasn’t unexpected, after two of Xi’s political rivals, including Li Keqiang, weren’t named to the 205-member Central Committee on Oct. 22, following the conclusion of the 20th CCP Congress.

Li’s exit from the top echelon of the Party is a surprise, considering he’s only 67 years old—a year younger than the Party’s unwritten retirement age. In China, CCP officials who are 67 or younger at the time of a Party congress can be promoted, while those 68 and older are expected to retire—an informal rule known as “seven up, eight down.”

On Oct. 22, Li Keqiang’s mentor, former Chinese leader Hu Jintao, was unexpectedly escorted out of the closing ceremony of the congress. Hu looked confused and reluctant about being asked to leave, before being led away by aides.

Chinese state-run media Xinhua News Agency later said on Twitter, which is inaccessible in China, that its reporter had learned that Hu had “insisted on attending the closing session of the Party’s 20th National Congress, despite the fact that he has been taking time to recuperate recently.”

“When he was not feeling well during the session, his staff, for his health, accompanied him to a room next to the meeting venue for a rest. Now, he is much better,” it wrote on Twitter.

But others saw the incident as a sign of a power play.

Sen. Marsha Blackburn (R-Tenn.), who sits on the U.S. Senate Armed Services Committee, said on Twitter that Xi was flexing his political muscle by having Hu removed.

“It is clear that Xi controls the Party Congress and wanted to show his muscles to the world by humiliating Hu Jintao in front of the foreign press,” Blackburn wrote.

Following the rollout of the regime’s new leadership, he said that China’s third-quarter economic data—which Beijing was originally scheduled to release on Oct. 18 but has delayed—won’t show anything positive.

“I believe the fourth-quarter economic data will be even worse. Economic challenges are going to get bigger year after year, and the [economy] is going to get worse,” Li said in an interview with the Chinese edition of The Epoch Times.

He added that it is political infighting that has propelled Xi to his current position. As a result, he foresees more political struggles in the future, potentially subjecting China to another era of mass-scale political movements.

Kenneth Roth, former executive director of Human Rights Watch, says that Xi has put together a team who won’t challenge him.

“The man who is afraid of debate chooses a leadership team that will not challenge him: Xi Jinping,” Roth wrote on Twitter. “A recipe for more repression and mismanagement.”

“Confirmation of Xi Jinping’s third term is an ominous moment not only for the millions of Chinese citizens who have suffered grave human rights violations under his rule, but also for people around the world who feel the impact of the Chinese government’s repression,” Hana Young, Amnesty International’s deputy regional director, said in a statement.

“The government’s policies and practices under Xi’s leadership pose a threat to rights not just at home, but globally. From the government’s campaign to silence and forcibly repatriate Uyghurs overseas to its attempts to redefine the very meaning of human rights at the United Nations, the arm of Chinese state repression increasingly extends beyond China’s borders.

“And as Chinese activists, human rights lawyers, independent journalists, and other human rights defenders brace themselves for more of the same—or worse—the international community must redouble efforts to ensure the next five years are different.”