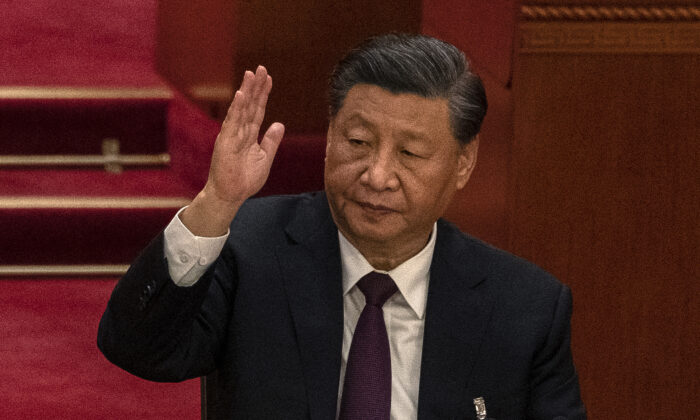 Chinese Leader Xi Jinping raises his hand as he votes during the closing session of the 20th National Congress of the Chinese Communist Party at The Great Hall of People in Beijing, on Oct. 22, 2022. (Kevin Frayer/Getty Images)
By Hannah Ng

Hannah Ng
Reporter
Hannah Ng is a reporter covering U.S. and China news. She holds a master's degree in international and development economics from the University of Applied Science Berlin.
View profile
and Tiffany Meier

The Chinese leader Xi Jinping may launch an invasion of Taiwan after the national congress to shift blame for the regime’s economic turmoil, according to China economic analyst Antonio Graceffo.

In a report to the 20th National Congress of the Chinese Communist Party (CCP), Xi has pledged to advance China’s economy while enforcing the zero-COVID policy. Yet reports emerge that the Chinese economy has been in such bad shape that Beijing could hardly offer a solution anytime soon.

“He [Xi] can’t actually do anything about the economy. The economy’s in such a bad state, there’s no way he can fix it. He can’t end COVID. So I’m very concerned that the only thing he can really do after this Congress is invade Taiwan,” Graceffo said in an interview with “China in Focus” on NTD News, the sister media outlet of The Epoch Times, on Oct 21.

“All they have to do is make a war. And then they can blame every problem on the war. Then it’s not Xi Jinping’s fault that they would have an economic crisis; it would be the fault of that war,” he added.

The analyst further elaborated on a debt crisis that China is facing, fueled by the real estate sector.

By his estimates, the debt volume could be even bigger with the ripple effect.

“Because banks buy government bonds, and then they may use them as collateral for other investments, or for other lending that they’re doing. And so if those bonds default, it could cause a chain of defaults,” he explained.

The expert pointed to the private and public debt figure, which he said now stands at about 250 percent of China’s GDP, based on CEIC data.

“So this could completely just take down the Chinese banking system. It could crash out the currency; [it] can be really catastrophic,” he stated.

Moreover, as the Chinese yuan has fallen sharply, breaking Beijing’s threshold of 7 against the U.S. dollar, it becomes harder for China to pay the foreign debt, he noted.

Meanwhile, the effort to rescue the yuan faces obstacles as China tends to cut interest rates to stimulate the economy.

“Trying to raise the currency while stimulating the economy, you can’t do both at the same time—they work against each other. So all the money will just be wasted. So the economic situation is just terrible,” Graceffo noted.

He pointed out that on Oct. 17, China’s National Bureau of Statistics delayed the release of key economic data scheduled for publication last week without any explanation.

“The fact that they’re refusing to release the data suggests to me that the data is so bad, that he [Xi] can’t even lie about it, that even Beijing can’t wave a magic wand to make it appear to be more than it is.”

“Goldman is predicting less than 3 percent growth in China this year,” he noted.

Graceffo also took note of the fact there has been a growing unfavorable view of China among other countries.

“China is at an all-time low in terms of perception in the world. You know, most of the countries in the world absolutely don’t trust China anymore,” he said.

A new global survey by the Pew Research Center found that negative perceptions of China in the United States have more than doubled since Xi took office in 2012, with 82 percent of U.S. respondents expressing an “unfavorable opinion” of China this year—more than double the 40 percent recorded in 2012.

Likewise, 80 percent or more of respondents in Australia, Japan, and South Korea also are said to hold unfavorable views of China.

“This polarization is increasing,” he noted, predicting that Europe and the United States would consistently have China policies, and economic policy standards that are in tune with each other.

“And it’s going to make it so much more powerful. That’s gonna be against Russia and China.”

Graceffo further urged that the United States double down surveillance of China, making sure that they’re not planning some drastic action.

“Don’t invest in China, because you’re feeding the CCP. You’re putting money in the pockets of the [People’s Liberation Army] PLA.”

Hannah Ng
Reporter
Hannah Ng is a reporter covering U.S. and China news. She holds a master's degree in international and development economics from the University of Applied Science Berlin.

Tiffany Meier
Tiffany Meier is a New York-based reporter and host of NTD's "China in Focus."