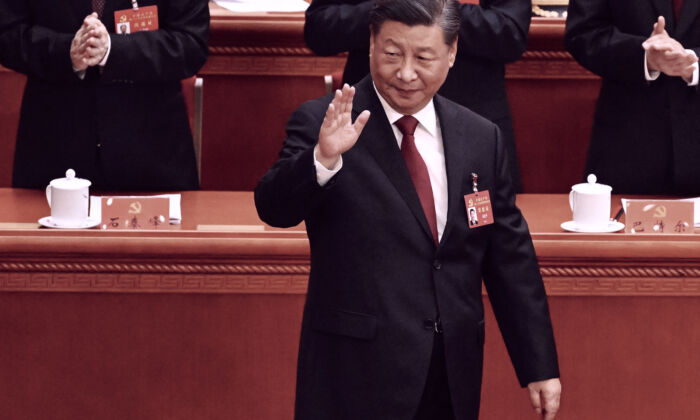 China's leader Xi Jinping waves as he arrives for the opening session of the 20th Chinese Communist Party's Congress in Beijing on Oct.16, 2022. (Noel Celis / AFP via Getty Images)
By Dorothy Li

As the country’s economy loses momentum, Chinese Communist Party (CCP) leader Xi Jinping is shifting the basis of his legacy to conquering Taiwan, though there is no indication of a looming invasion, according to analysts.

Xi’s speech at the opening of the 20th Party Congress, a twice-a-decade-event, on Oct. 16 received the biggest applause when he praised the Party’s determination to quash Taiwan’s independence.

“We will never promise to renounce the use of force, and we reserve the option of taking all measures necessary,” Xi told the gathering of over 2,000 hand-picked CCP delegates in Beijing.

Analysts pointed out that Chinese leaders haven’t used such hawkish language at Party congresses during the past two decades, prompting speculation that a war with Taiwan could come sooner rather than later.

One reason is Xi’s legacy, according to three experts.

Xi, 69, is almost certain to claim a record-breaking third five-year term in office, which will be unveiled when the week-long political conference closes. Should he secure the position, Xi will cement his role as the Chinese regime’s most powerful ruler since its first leader Mao Zedong.

“The concern is that now he’s consolidated power, he may decide I’m going to make my mark and create my legacy. That’s a scary thought for Taiwan. But it’s a scary thought for the whole region and for the world,” Jon Pelson, author of the book “Wireless Wars: China’s Dangerous Domination of 5G and How We’re Fighting Back,” told NTD, a sister media outlet of The Epoch Times.

Wang He, a U.S.-based Chinese commentator, expressed a similar viewpoint, saying Xi has tied his legacy to controlling the self-ruled island.

“Xi is telling the CCP elites that annexing Taiwan could only be achieved by himself,” Wang told The Epoch Times

While the CCP claims that Taiwan as part of its own territory, the island has never been ruled by the regime and has been governed as an independent entity for more than seven decades.

Xi’s predecessors, like Deng Xiaoping, had often used strong economic performances to extol the successes of their reigns. But China reported nearly stagnant growth in the previous quarter, marking its worst performance since the country began recording data in 1992, not taking into account a 6.9 percent contraction in the first quarter of 2020 at the onset of the COVID-19 pandemic.

If he can’t revive China’s economy, Xi may use all-out war across the Taiwan Strait to divert the public’s attention at home and reduce pressure within the Party, according to a Taiwan-based expert Su Tzu-yun.

“Xi will only be able to launch an attack [on Taiwan] if he has to divert attention away from internal pressures to the external,” said Su, a senior analyst at Taiwan’s government-funded Institute for National Defense and Security Research.

But Su said there is no immediate indication of the conflict across the Taiwan strait, though Beijing has ratcheted up military pressure towards the island.

“The real possibility for the CCP to mount an invasion [of Taiwan] in the next five years is low,” Su told The Epoch Times.

According to Su, Beijing is not fully capable of conquering the democratic island. If it attacks Taiwan by force before 2027, the Chinese military is likely to lose the war, especially with the potential intervention from countries like the United States and Japan.

The regime’s current tactic, Su said, is to escalate military intimidation of Taiwan’s forces by flying warplanes and sailing warships near the island on a regular basis.

“The Chinese regime is piling military pressure by frequently sending aircraft and warships to harass Taiwan. This is what [the CCP] called a ‘new norm,’ the core of its hardline strategy,” said the Taiwanese analyst.

Such harassment is happening on a near-daily basis. The latest incursion occurred on Oct. 18 when Taiwan’s defense military reported 11 Chinese military aircraft and two vessels were seen in its surrounding region.

Beijing’s plan for Taiwan will become clearer when the country’s next top leadership is unveiled, according to Su. He said if the CCP promotes more economic officials to its top leadership bodies, this would suggest that Beijing prioritizes economic development over seizing Taiwan.

Above all, Su warned that Taiwan must be prepared.

“No matter what [Xi said], Taiwan should continue its preparation,” said Su. “Being ready is the best way to maintain peace and prevent a fight [with the CCP].”

Xi gave little sign that the CCP would change its pandemic-handling approach that has hammered the country’s economy: its draconian “zero-COVID” policy.

“While he boasts the success of its pandemic prevention policy, [this description] is completely contrary to reality,” said Feng Chongyi, a professor of China studies at the University of Technology Sydney. “The fact is all industries are suffering and the economy is declining.”

Feng noted that Xi made it clear that the CCP will continue the zero-COVID policy despite the heavy economic tolls. The widespread travel restrictions and repeated lockdowns have led to soaring unemployment among young jobseekers, which is now at nearly 20 percent, hitting the worst level since 2005 when authorities began compiling unemployment data.

Foreign economists and investors further slashed China’s economic growth forecast as renewed lockdowns swept through the country ahead of the Party congress. For example, Japanese Bank Nomura revised its forecast for China’s full-year economic growth to 2.7 percent, far lower than the regime’s growth target of “around 5.5 percent.”

On Oct. 17, China’s National Bureau of Statistics delayed the release of key economic data scheduled for publication this week without any explanation. The latest figures—including the country’s third-quarter gross domestic product (GDP)—were closely watched by outsiders after China reported only 0.4 percent year-on-year growth from April through June. Officials didn’t give a new date for the release.

“COVID is just one example of the damage [Xi] did to his own country, because the value there is more strengthening control, than success and flourishing economy or society,” Pelson said.

Citing the example of Shanghai, a city of 25 million that endured a two-month lockdown earlier this year, Pelson said that such punishing restrictions were ultimately a matter of the CCP exerting its control.

“When [Xi] had the crackdown in Shanghai, I had friends in [the] country saying, ‘do you know why he’s doing this?’ They say, ‘after Hong Kong, Shanghai is the most Western liberal, capitalistic city in the country.'”

But Pelson’s reply to them was: “This was Xi saying, ‘you have to remember who is boss.'”

“It was a flexing of muscle,” he said, adding that it also amounted to “killing the goose that lays the golden egg” given the city’s status as mainland China’s financial center.

“The zero-COVID is a great example of what’s motivating Xi’s actions is not the common good of the people—It all ultimately is about power.”

Tiffany Meier, Luo Ya, and Ning Haizhong contributed to the report.