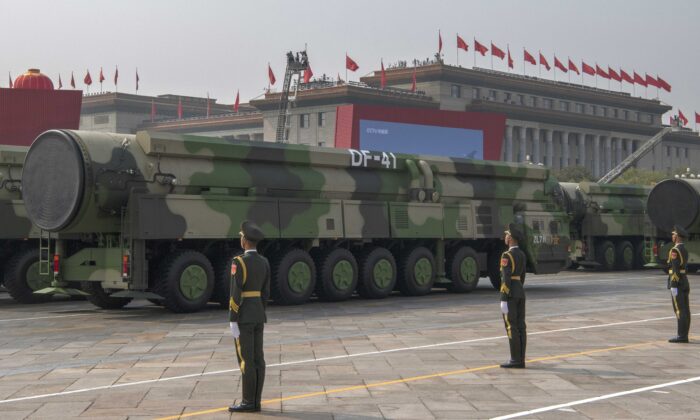 The Chinese military's new DF-41 intercontinental ballistic missiles, that can reportedly reach the United States, are seen at a parade to celebrate the 70th Anniversary of the founding of the People's Republic of China in 1949, at Tiananmen Square in Beijing, China, on Oct. 1, 2019. (Kevin Frayer/Getty Images)
Viewpoints

Xi Jinping Is Mobilizing China for War, Possibly With Nukes

China in recent weeks has sent tens of thousands of troops to its disputed border with India in Ladakh, high in the Himalayas.

Beijing looks as if it is preparing for a full-scale invasion of Indian territory.

This deployment occurred while Chinese ruler Xi Jinping, in the words of the Communist Party’s China Daily, made a “pro-peace, pro-development, and pro-cooperation speech” to celebrate the centennial of the Party’s founding.

“The Chinese people have never bullied, oppressed, or subjugated the people of any other country, and we never will,” Xi said on July 1.

In May of last year, the People’s Liberation Army moved troops south of the Line of Actual Control in Ladakh, in other words, into Indian-controlled territory. A month later, on the night of June 15, Chinese soldiers launched a surprise attack, killing 20 Indian troops.

India responded by reinforcing its forces and launching a counterattack in August. China then added to its troop count, increasing the number of soldiers from 15,000 a year ago to 50,000 at this moment. Beijing has also brought advanced weapons to the area and began building bases.

Ladakh is not the only Himalayan hotspot. There is a Chinese encroachment in India’s Sikkim as well as incursions in neighboring Bhutan and Nepal.

Beijing’s campaign against India has been multifaceted. “Since June of last year, there was a China-attributed attack on the Mumbai electric grid, Chinese-linked Maoist terrorists killed another 20 Indian security forces, and we witnessed a destructive attack on an iPhone parts-manufacturing plant that looks like part of a Beijing political warfare operation to discourage the shifting of supply chains to India,” Cleo Paskal of the Foundation for Defense of Democracies told Gatestone.

As a result, many in India now see China in the worst possible light. As Paskal explains, “The breadth and depth of the Communist Party’s aggressive unrestricted warfare against India leads one to think there are no barriers to Beijing’s malign behavior.”

The Indian people are right to be concerned. China has changed the definition of “warfare,” and one of its instruments is disease. If SARS-CoV-2, the pathogen causing COVID-19, did not start out as a biological weapon, Chinese Communist Party leaders turned it into one, by lying about contagiousness and pressuring other countries to take disease-ridden arrivals from China.

“It’s no wonder many Indians think their second wave of coronavirus was a deliberate release by China to weaken them further,” Paskal notes.

Beijing looks as though it is even thinking of using nuclear weapons to fight the next war.

The Washington Post reported China appears to be building, in an area covering more than 700 square miles in the Gansu desert, 119 missile silos for the ten-warhead DF-41 intercontinental ballistic missile. When added to 26 more silos the Chinese military is building elsewhere, China could soon be housing from these fixed locations about as much firepower as the existing U.S. nuclear arsenal. When China’s missiles carried on mobile launchers and submarines are added, China’s warheads could end up exceeding America’s.

Because Beijing already has a sufficient number of nukes to deter others—China has had for a long time sufficient weapons for a so-called “minimal deterrent”—it looks as if Chinese military planners are thinking of using nuclear weapons in an offensive capacity. China’s flag officers and political leaders have in public threatened to use their arsenal in this way.

In any event, Xi Jinping in his bellicose July 1 speech promised to “crack heads and spill blood” of those standing in the way of what are, in essence, his plans to take territory under the control of others.

More significantly, he threatened to take down the existing Westphalian international system of sovereign states, established in 1648. “The Communist Party of China and the Chinese people, with their bravery and tenacity, solemnly proclaim to the world that the Chinese people are not only good at taking down the old world, but also good at building a new one,” Xi said.

A new world? Throughout this century, Xi has made indirect references to tianxia, or “all under Heaven.” For two millennia, Chinese emperors believed they both had the Mandate of Heaven to rule tianxia and the obligation to do so.

Lately, Xi’s references in public pronouncements have become unmistakable, and his subordinates have been clear that Xi believes that everyone outside China owes him obedience.

Xi, while spouting tianxia-like language and bellicose words, has been getting the Chinese people ready for war. On July 1, he talked about foreigners meeting a “wall of steel built with the flesh and blood of 1.4 billion Chinese people.”

Moreover, he is making preparations to use his shiny new military. Amendments to China’s National Defense Law, effective the first of this year, transfer powers from civilian to military officials.

It is true that the law could be mere posturing—the Communist Party has always been in control—but the signaling is ominous nonetheless. The new law, after all, contemplates the mass mobilization of society for war.

The changes signal the growing clout of the People’s Army inside the Party and highlight the militarization of the country’s external relations. China is fast becoming a military state.

Xi Jinping on July 1 told the world what he is going to do. We are, in all probability, in the last moments of peace.