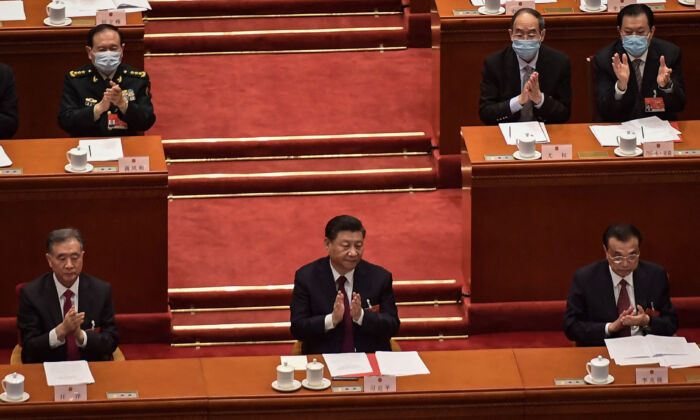 Politburo Standing Committee member Wang Yang (L), President Xi Jinping (C) and Premier Li Keqiang applaud after the result of the vote on changes to Hong Kong's election system was announced during the closing session of the National Peoples Congress (NPC) at the Great Hall of the People in Beijing on March 11, 2021. (Nicolas Asfouri/AFP via Getty Images)
Chinese Regime

Xi Wants Officials to Get ‘Two Faced’ in Spreading the CCP’s Agenda to the World: Experts

As Beijing gears up for a major charm offensive to endear the West, expect no genuine change from the Chinese Communist Party—only “more cunning,” analysts warn.

In late May, Chinese leader Xi Jinping convened a “study session,” telling top communist officials to make it a priority to create a “trustworthy, lovable, and respectable Chinese image.”

That, according to Xi, requires them to “widen their circle of friends,” “win over the majority,” and “pay attention to the strategy and art of narrative warfare” so that on key issues they can make themselves heard. They must set the tone right to present themselves as both “open and confident, yet modest and humble,” said Xi.

The communist leader’s speech was a call to arms directed at the officialdom, said Sydney-based academic Feng Chongyi.

“He’s waging a war of words to control global narratives,” Feng, a China studies professor at the University of Technology, told The Epoch Times.

Xi, he said, was trying to “help his minions work more effectively.”

In the leader’s view, the regime hasn’t done enough to deceive the world with so-called positive stories coming from China, so “now it needs to double down,” Feng said.

While the regime’s efforts to sway the global narrative are not new, the current international pressure has given it added urgency.

The Chinese regime has suffered a series of setbacks as its diplomats have sparred with countries around the world under an aggressive approach, known as “wolf warrior diplomacy.”

In the European Union, lawmakers have shelved a proposed EU-China trade agreement several years in the making, after Beijing imposed retaliatory sanctions on Parliament members.

Australia, which has borne the brunt of Beijing’s anger after last year calling for an independent investigation into the origins of the pandemic, recently teamed up with New Zealand—a country that had been a reluctant critic of China—to express “grave concerns” about Beijing’s tightening control of Hong Kong and its treatment of Uyghur Muslims in Xinjiang, which a growing number of countries have recognized as a genocide.

In the Philippines, the Chinese regime’s amassing of hundreds of militia-manned boats in disputed reefs lying in Manila’s territorial waters triggered rage from the country’s officials. Philippine foreign secretary issued an expletive-laden warning on Twitter demanding Chinese fishing vessels to stay off disputed waters. Even President Rodrigo Duterte, who has historically been friendly toward the regime, threatened to send military ships to the South China Sea to “stake a claim” over resources in the disputed region.

This week, both the Group of Seven (G-7) rich nations and NATO turned their focus to challenges posed by the Chinese regime—a sign of an emerging coordinated effort by democracies to confront Beijing.

With the regime’s handling of the pandemic attracting rising scrutiny, negative views of China surging in some countries, and anger mounting toward Beijing’s human rights abuses, the West appears to be “cornering” China’s communist party, said Huang Jinqiu, a writer and dissident based in eastern China’s Zhejiang Province. The challenge is multifaceted, from economically to militarily to ideologically, he added.

From the perspective of the ruling party, there is the danger that “the cold war may turn hot,” and it is eager to get out of the dilemma, Huang said.

“How do you break it through? You begin by winning their hearts,” he said. And this is where propaganda comes into play.

“This is a self-rescue measure to improve its global image so that it’s not always the villain that everyone mocks,” he said.

Such propaganda could come in a variety of forms and may not be as visible as people think, said Huang, who pointed to the state-funded Chinese cultural programs, popular Chinese-owned apps, and advertorials by Chinese state-run media placed in Western outlets.

“A lot of Westerners may not want to have anything to do with China, but they may think highly of TikTok and, because of the product, develop a fonder feeling for China,” he said, referring to the Chinese-owned video app that the Trump administration had attempted to ban over data security concerns.

But Hua Po, a Beijing-based political analyst, cautioned that Chinese diplomats are unlikely to abandon their fiery rhetoric any time soon.

While Xi’s call for modesty and humility might seemingly contradict their aggressive style, to the regime it is only “a matter of strategy,” said Hua.

“The so-called humility is just a tactic. You want to be a bit more tactful in some areas, such as promoting Chinese culture, so it’s easier for people to accept [the propaganda].”

But underlying this strategy, the goal is still the same: the regime “won’t back down from its fight for discourse power” with the West, Hua said, referring to Xi’s desire to control public discussion all over the world.

In the meantime, the regime may opt for a softer approach toward certain countries to get them on its side, while holding an aggressive stance toward others, according to Hua. For instance, that would mean being insistent toward America, harsh reprisals toward Australia, befriending Germany and European countries, and a combination of both for Canada.

That Beijing was not going to retreat diplomatically was evident in remarks made by scholar Zhang Weiwei, who was the only academic invited to lecture senior officials at Xi’s study session, in an English interview with Chinese Communist Party (CCP) mouthpiece People’s Daily on June 1.

“The Chinese story had not yet been told very well to the outside world, especially in a language in a way that foreigners can understand,” the Fudan University professor said. He blamed it as “mainly a problem on the part of the West.”

Zhang further declared that “there’s no way to contain a country like China.” Doing so, he said, would only result in “mutually assured destruction.”

Feng, the Sydney academic, described the new approach as a “two-faced strategy.”

“This is not to reject wolf-warrior diplomacy, but rather to complement it,” he said. “They are refining their deception skills and getting more cunning.”

“You play either the ‘wolf’ or the ‘cat’ depending on the circumstance,” he said.

No matter how cunning the tactics, there are limits to what the regime can do, said Feng.

The CCP “has gone too far,” he said. “Even its friends, the so-called panda-huggers, find it embarrassing to speak on their behalf.”