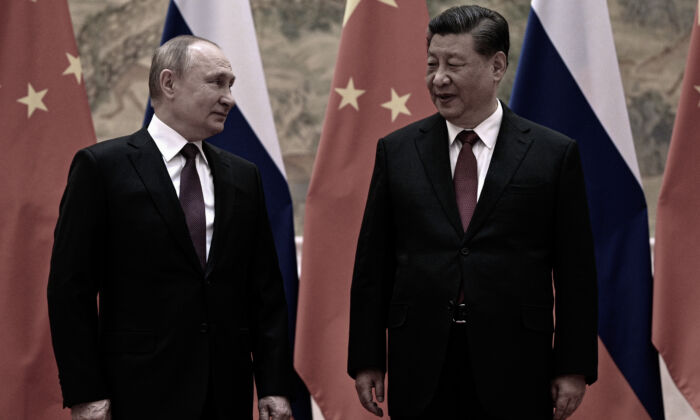 China’s leader Xi Jinping met with Russian President Vladimir Putin in Beijing on the opening day of the Winter Olympics in a show of solidarity amid mounting pressures from the West.

Friday’s meeting also marks Xi’s first in-person meeting with his counterpart for nearly two years. The leader of the Chinese Communist Party hasn’t left the country since the onset of the pandemic in January 2020.

Facing U.S.-led efforts to pressure the Chinese regime over its human rights abuses, and Russia over its military buildup near the Ukraine border, the two leaders proclaimed a “no limits” friendship during the summit on Feb. 4. They also signed gas and oil contracts worth an estimated $117.5 billion.

Displaying a united front, the two leaders issued an over 5,000 word statement after the meeting, highlighting their opposition to what they called “interference in the internal affairs” by “other States,” in a veiled reference to Washington and its allies.

According to the English version joint statement released by the Kremlin, Moscow “reaffirms its support” for Beijing’s stance on Taiwan—the Chinese regime views the self-ruled island as its own territory to be taken by force if necessary.

The Chinese regime backed Russia’s opposition for the enlargement of NATO, issues at the heart of Moscow’s confrontation with the United States and its allies over Ukraine, according to the readout.

The two sides voiced their opposition to AUKUS, a newly-formed security alliance between the United States, the UK, and Australia, which experts have viewed as a game-changer for countering the Chinese regime’s aggression in the Indo-Pacific.

The summit came hours before Xi opened the Winter Olympics, a global event that has been overshadowed by a spate of diplomatic boycotts amid rising scrutiny of the communist regime’s suppression in Xinjiang, Tibet, and Hong Kong.

Putin is the most prominent guest at the opening ceremony on Friday. The United States and some major participants, including the UK, Canada, and Australia, announced they wouldn’t send any official delegation to the Games in protest against the regime’s human rights violations against Uyghurs in the far-western Xinjiang region.

The meeting also came amid growing fears of a potential war between Russia and Ukraine, which experts have said may lead to Beijing playing a major role in supporting the Kremlin.

The United States and its allies have warned Russia of harsh sanctions if it goes ahead with an invasion of Ukraine, but some 100,000 Russian troops remain near the border with no signs of de-escalation.

On Feb. 3, the United States warned Chinese firms that they would face consequences if they sought to help Russia by evading export controls imposed on the country in the event of an invasion of Ukraine.

The U.S. announcement comes hours after the Chinese regime signaled its “coordinated positions” on Ukraine during a meeting between the two countries’ foreign ministers, Wang Yi and Sergei Lavrov, in Beijing on Thursday, according to Beijing’s foreign ministry.

Some observers suggested that Beijing is closely watching how the United States and its allies act in response to the standoff over Ukraine, as the regime ponders its strategy towards Taiwan.