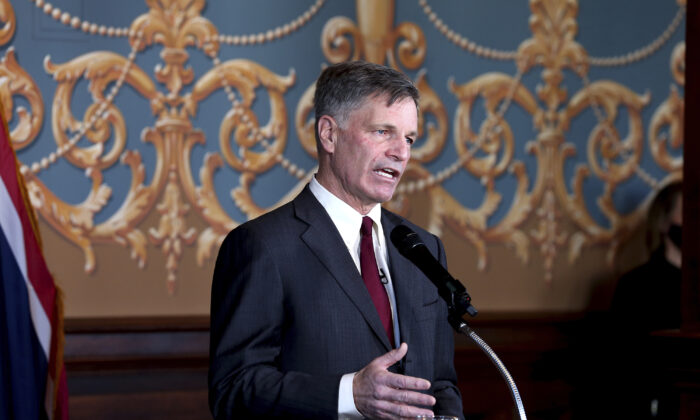 Wyoming Gov. Mark Gordon this week signed into law a bill that requires voters to present photo identification in order to vote.

The Republican governor signed House Bill 75, which requires voters to present valid government-issued ID before casting a ballot. Identification could include a driver’s license, a tribal identification card, a Wyoming identification card, a U.S. passport, a U.S. military card, an ID from a university or public school within the state, or a Medicare or Medicaid insurance card.

The bill was approved by both chambers of the state legislature on April 1 with overwhelming support.

In a statement to The Epoch Times, State Rep. Chuck Gray, a Republican who sponsored the legislation, described the passage at the time as “a victory for the citizens of Wyoming.”

“It is a necessary function of our Republic to provide our citizens with confidence that our elections are secure, fair, and valid. Even though it took over 20 years for us to pass this necessary legislation, I am proud that we were able to meet this important milestone for Wyoming,” he said.

Meanwhile, some Democrats in the state have argued that the law would impose unnecessary burdens on voters, which they argue would result in “voter suppression.”

“I think when you look at how our election structure works, we need to do everything in our power to encourage (voting), especially with our young people, our new people, our people of color, and those less fortunate. This bill doesn’t encourage that,” said Rep. Andi Clifford, a Democrat who challenged the bill.

The Wyoming chapter of the American Civil Liberties Union said in a statement that it opposes the bill but didn’t indicate whether it would challenge the measure.

The enactment of the bill comes amid a contentious battle over voting rights and election integrity that was triggered following the expansion of absentee voting during the 2020 election. Voter ID laws have long been opposed by the Democratic Party, which characterizes such laws as “voter suppression.” They’re concerned that some Americans don’t hold the proper documentation needed to meet the requirement.

Georgia recently came under intense scrutiny for passing a series of election reforms, including requiring state-approved identification to vote absentee by mail. The Peach State has since faced corporate backlash and criticism from critics of the law, but state officials have remained firm over the need for legislative measures to advance election integrity following the state’s contended results in the November 2020 election.

Data from a recent Associated Press poll has found that nearly three-quarters of Americans agree that photo identification should be required to vote. Seventy-two percent of respondents reported that they were in favor of requiring all voters to provide photo ID in order to vote. It added that those in support of the requirement were mostly Republicans (91 percent).

The AP poll was conducted between Mar. 26 and 29 with 1,166 adults and has a margin of sampling error of plus or minus 3.6 percentage points.