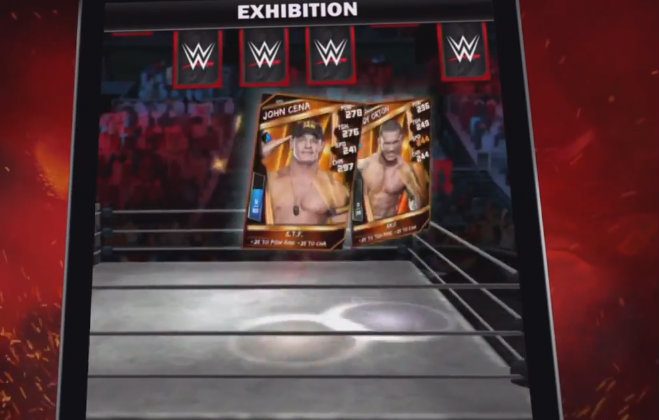 The game is developed by Cat Daddy Games and Visual Concepts, two 2K studios. It is available for download from the Apple App Store, Google Play Store, and Amazon Appstore.

Players can build teams of WWE Supestars, Legends, and Divas from a collection of over 400 cards.

The various wrestlers have different versions across the rarity scale, and their different incarnations on the rarity correspond to increased power. For instance, a rare The Rock card will undoubtedly have better stats than a Common The Rock card.

Here are some details of the game via WWE.com:

Fast-paced Action – Players will take individual Superstars, tag teams or five-person teams online against other players to test their skills, while winning matches enables new cards to join their rosters.

Customizable Teams – Players will discover cards of different rarities and use them to assemble the ultimate WWE roster. Training and combining cards upgrades the cards’ levels and unlocks their full potential.

King of the Ring – Players will put their teams to the ultimate test by playing through full seasons. High levels of participation will result in higher rankings and bigger rewards.

“Get ready to experience WWE card battles on your favorite mobile device – anywhere and at any time,” he added.