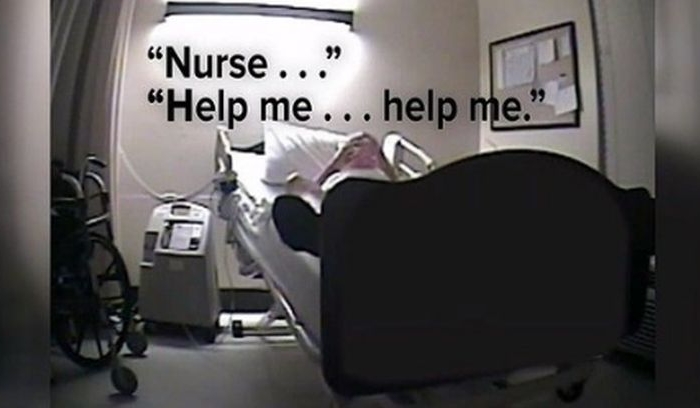 James Depsey, 89, of Woodstock, Georgia, in a video recording of his death at the Northeast Atlanta Health and Rehabilitation Center in 2014. (Screenshot via Youtube/ 11Alive)
US News

Video: Nurse Explains How Man Dies in her Care—Drastically Different than Secret Video

A hidden video shot in 2014 shows nurses laughing after a veteran called for help and later died while they were supposedly helping him.

The family of James Dempsey, 89, of Woodstock, Georgia, placed a secret camera in his room at Northeast Atlanta Health and Rehabilitation Center.

His son, Tim Dempsey, said his father was worried about staying at the facility overnight, so they placed a nanny cam in the room facing him, WSB-TV reported.

On that night, he died.

“We would have just thought it was natural causes and everything was done that should have been done and he passed away in his sleep,” Tim Dempsey told WSB-TV’s Rachel Stockman in 2015.

In the clip, the decorated World War II veteran can be heard calling for help six times before becoming unconscious. “Nurse, help me… help me,” he can be heard saying.

The nurses didn’t perform the life-saving measures they should have, and can be seen laughing as they started an oxygen machine.

At one point, a nurse on the video says, “you gotta stop putting the light on. What do you want now?”

Another tells him he just has anxiety, and to “calm down,” WSB-TV reports.

Attorneys for the nursing home tried to stop the publication of a damning video in which the supervisor, who can be seen in the video laughing, gives a court deposition where she tells a drastically different story than what the footage shows, 11Alive reported.

However, a DeKalb County judge ruled in favor of 11Alive to have the footage unsealed.

89-year-old James Dempsey died while staff at his nursing home laughed in front of him. WARNING: Graphic. https://t.co/VUpYKqHQRp pic.twitter.com/sPuOF2fITz

“State records show nursing home staff found Dempsey unresponsive at 5:28 am. It took almost an hour for the staff to call 911 at 6:25 a.m.,” according to 11Alive’s report.

It was two hours before paramedics arrived, according to the report.

The family sued and reached a settlement with the nursing facility, after which they declined to comment, 11Alive reported.

The operator of the care center, Sava Senior Care, issued a statement to 11Alive that it’s “saddened by the events, which occurred more than three years ago.”

It says it has “new leadership and the leadership team and the staff have worked very diligently to improve quality care and the quality of life for our residents … The facility recently was deficiency-free during our recent annual inspection conducted by the Georgia Department of Health on May 25, 2017.”

According to The Mirror, the three nurses in the video have given up their licenses.

It took the nursing facility 10 months to fire them after the video was brought to their attention, according to 11Alive, and the nurses only gave up their licenses in September.

We have a small favor to ask of you. More people are reading The Epoch Times than ever, but ad revenues are plummeting across the industry. If you can, please share this article on Facebook and help The Epoch Timesearn more ad revenue. It takes less than a minute. Thank you!