Wray Refuses to Answer Whether FBI Had Sources ‘Dressed as Trump Supporters’ on Jan. 6 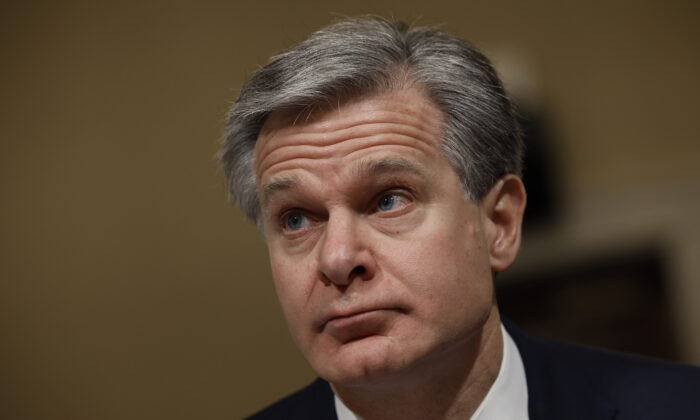 The FBI’s director on Nov. 15 declined to answer when he was asked whether the bureau had confidential informants among the supporters of then-President Donald Trump on Jan. 6, 2021.

“Did the FBI have confidential human sources embedded within the Jan. 6 protesters on Jan. 6 of 2021?” Rep. Clay Higgins (R-La.) asked Christopher Wray, the director and a Trump appointee, during a hearing in Washington.

“As I’m sure you can appreciate, I have to be very careful about what I can say, about when we do and do not, and where we have and have not used confidential human sources,” Wray said.

“But to the extent there’s a suggestion, for example, that the FBI’s confidential human sources or FBI employees in someway instigated or orchestrated Jan 6th, that’s categorically false,” he added.

Higgins then asked, “Did you have confidential human sources dressed as Trump supporters inside the Capitol on January 6th prior to the doors being opened?”

“Again, I have to be very careful about what I can say,” Wray said.

“It should be a no!” Higgins said.

“Can you not tell the American people: ‘no, we did not have confidential human sources dressed as Trump sources positioned inside the Capitol on January the 6th?'” Higgins said.

“You should not read anything into my decision not to share information about confidential human sources,” Wray said.

Higgins’s time to question Wray and other Biden administration officials then expired. He did not get to ask more questions later, and no other members pursued the line of questioning further.

The FBI has never confirmed having confidential sources or undercover agents among the crowd on Jan. 6 but court filings indicate that a number of sources were embedded with the Oath Keepers and other groups whose members took part in the Capitol breach.

Questioned on the matter in 2021, then-FBI official Jill Sanborn said she could not answer.

Officials have also not answered questions about videos that show doors being opened on Jan. 6, enabling people to enter the Capitol.

Later in the hearing, Rep. Elissa Slotkin (D-Mich.) said she was concerned about people thinking the FBI “is a political tool” and asked Wray to “explain in your words why they should trust their federal law enforcement.”

Wray said that he hears from people outside the FBI that the FBI “does the right thing in the right way” and that he would “stack our workforce up against anywhere in the world, anytime.”

“And the Americans should have deep confidence in those people. And I will add that when it comes to perceptions of the FBI, that the number of Americans all across this country applying to be special agents in the FBI, has been going up, up significantly over the past three years. At a time when, as I hear all the time, law enforcement all over this country is having the opposite experience. And I think that speaks very well of Americans in every state represented on this committee.”