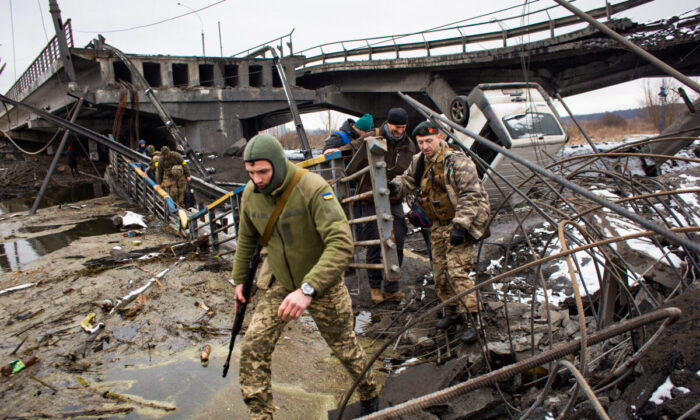 Russia’s invasion of Ukraine could be a match that ignites a global conflict, where an emboldened Beijing and its proxies exploit the situation to act on their own ambitions, according to China analyst and author Gordon Chang.

“We didn’t think Putin was going to invade Ukraine. And so right now the world is a very different place, and we have to throw out our assumptions, and we have to start defending ourselves,” Chang recently told Epoch TV’s “Crossroads” program.

The reason the military conflict in Ukraine could turn global is two-fold, according to Chang.

From the Russian side, “Putin is not going to stop at Ukraine,” but will likely go after members of the North Atlantic Treaty Organization (NATO) and destabilize the whole of Eastern Europe.

Then there’s China that has largely banded itself with Russia in their mutual opposition to the United States, which will take a cue from how the world responds to Russia’s assault.

“I don’t know where this ends up. But we cannot rule out the worst scenarios,” said Chang.

Russian President Vladamir Putin has put the country’s nuclear forces on high alert, escalating tensions and raising the specter of a nuclear war.

Lack of US Leadership

With Russia breaking apart Ukraine, nations are looking to the United States to step in as the world leader. But the pattern of U.S. responses from the beginning has been “extremely troubling,” he said.

If the Biden administration wanted to show it was “serious” about deterring Putin, the president should have taken action before the invasion, according to Chang.

“Before the first Soviet Russian soldier steps into Ukraine, you knock their banks out of SWIFT. You stop the Nord Stream 2 pipeline. You cut Russia off completely, from not only the banking system but from the global economy. You go after Putin. You issue red notices at Interpol,” he said.

“Biden didn’t do any of them,” he said. “His whole idea was, we impose sanctions after they invade. Well, that’s too late.”

Chang sees this as “a very unenthusiastic approach to the use of American power.”

“We are seeing the same themes that led to the beginning of World War Two in Europe,” he said.

“China sees this, it sees the failure of American policy, it thinks it can do what it wants with regard to Taiwan, or Japan or the Philippines or India or God knows where,” he continued.

“So we could have simultaneous conflicts on both ends of the Eurasian landmass. We could see their proxies, North Korea, Iran, Pakistan, maybe even Algeria act up to take advantage of the situation when you have wars in all those places. Yeah, that’s world war three.”

Beijing is by no means just a keen observer in the background, Chang said.

The regime has boosted ties with Moscow in recent years. Ahead of the Beijing Olympics opening ceremony, Chinese leader Xi Jinping received Putin as his highest-profile guest during the Games, and signed a pact pronouncing a partnership that has “no limits.”

Chang noted that the 5000-word joint communique later released described the bilateral relationship as “superior to political and military alliances of the Cold War era.”

“This, I think, was Moscow’s language, and Beijing accepted it, which is basically a pretty good description of where they are today,” Chang said.

Supporting Putin has, in Chang’s words, appeared to be China’s “bottom line.” In recent days, the country’s foreign ministry has criticized Western sanctions on Russia, and said it would carry on trade as normal with Russia based on mutual interests.

Putin and Xi’s February meeting also resulted in new oil and gas deals worth nearly $118 billion. Another contract, signed on Feb. 18, will see Russia supply 100 million tons of coal in the coming years to China. On the day of Russia’s attack, China also lifted wheat import restrictions that had been imposed on Moscow.

Russia and China are now “presenting a united front to the United States” and the world at large, said Chang, noting that the two countries had conducted joint military drills in recent months, with Russian soldiers deploying Chinese military gear for the first time last August.

“The reality is that in the here and now, China and Russia are on the same page. That’s because they see their interests coincide, and they identify the same adversary, which is us,” he said. “These are two countries that form a coalition and they’re taking on the world.”

The day before the Putin-Xi meeting, State Department spokesperson Ned Price warned Chinese firms not to help Russia avoid sanctions in the event of an invasion. That Russia and China partnered up the very next day shows a degree of assertion and defiance, said Chang.

“Remember, this is a China that all throughout 2021 was saying that the United States didn’t deter China. So this is another symptom of basically Beijing looking at the world and saying: ‘we’re going to do what we want,’” he said.

Ahead of the invasion, White House officials had attempted to engage China to help avert an attack by urging Putin to stand down, but China chose not to weigh in, a senior White House policy advisor said Feb. 28.

The regime’s threats over democratically-ruled Taiwan are increasingly coming to the fore. A Chinese civilian plane flew into the defense zone of Taiwan-controlled Dongyin Island on Feb. 5, the second day of the Beijing Games, potentially to test the island’s military response, Taiwanese defense officials said at the time. Chinese military aircraft have also been flying into the island’s air defense zone on a regular basis over the past two years.

“It is actually an escalation,” said Chang of the Feb. 5 incident.

Chang said the current period reminds of the late 1930s, “a time where if you lived anywhere in the world, you could sense the danger.”

“But at least you still had hope that leaders would be able to manage things. But we know that the worst, in fact, did happen. And in fact, what happened was worse than anyone ever thought at the time. Well, we’re sort of at that stage or even beyond it,” he said.

“I don’t see a Western leader with the strength to stop it. Which means that this is going to be perhaps the worst moment in history.”