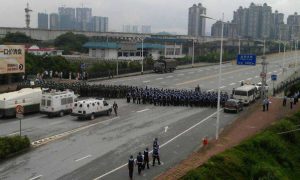 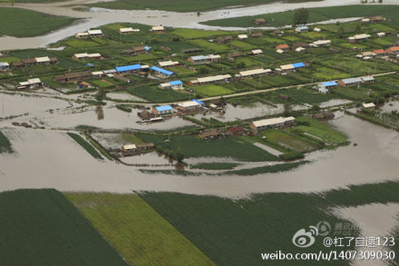 A view of flooded cropland in China's northeastern Heilongjiang Province is seen in this photo posted to the microblog platform Weibo. Continuous rainfall in the region has resulted in the worst flooding in thirty years. (weibo.com)
China

While hot weather has been scorching many provinces in southern China, the worst flood in 30 years has hit in northeastern China’s Heilongjiang Province. Since mid-May at least eight people have been confirmed dead in natural disasters in the region— floods and hail storms, and millions have been affected, according to Chinanews.com, the website of China News Agency.

Continuous downpours since June in Heilongjiang have caused severe flooding. Thirty two rivers have surpassed their warning levels. The Nen River has continued to rise. That river is the longest tributary of the Songhua River, which is the largest tributary of the Heilongjiang River, also known as the Amur River, which flows from Outer Mongolia and forms the border between China and Russia.

As of 8 a.m. on Tuesday, according to statistics by the Heilongjiang Provincial Department of Civil Affairs, more than 4.33 million people have been affected and about 6 million acres of cropland have been damaged. The crops on over 1.5 million acres have been destroyed, the Chinanews reported.

In addition, more than 2,200 agricultural irrigation systems and flood control barriers have been damaged. Total direct economic losses are estimated at US$1.81 billion (11.1 billion yuan), it said.

An orange alert for severe flooding, the second highest level of warning, was issued at midnight on Aug. 11 by the Heilongjiang Provincial Flood Control and Drought Relief Headquarters, according to the Heilongjiang provincial website Northeast Web dbw.cn.

At 8:30 a.m. on Aug. 12, the China Meteorological Administration issued the level IV emergency alert for rainstorms, forecasting heavy rain to continue in northeast China and Inner Mongolia over the next 10 days.ml

Since July 30, according to the Heilongjiang Daily, the official newspaper of the Heilongjiang provincial Communist Party committee, rainfall over the province is about 55 percent more than the average for the same period in previous years. The total rainfall along the Heilongjiang River is 86 percent higher than before.

A resident in Huma Town, which is downstream where the Huma River joins the Heilongjiang River, told Sound of Hope (SOH) Radio about the flooding situation in the town, “Flood waters are coming to shore now, so most of our crop areas are flooded. Continuous rains for days have drowned our farm crops, basically soybeans and wheat. The homes in this region are all under water, and it’s even worse in the countryside.”

“The flood damaged the railroads, submerged our houses [in the countryside], and covered most of the farmland. The river bend is completely flooded,” SOH quoted a resident in Sunwu Town of Heihe City as saying.

Out of 110 reservoirs in the province, there were 40 whose levels exceeded flood levels. On the night of Aug. 12, the water level of the Heilongjiang River in the city of Harbin, the provincial capital, reached 97.13 meters (318 feet), the highest record since 1985, New Tang Dynasty Television reported.

The flooding has forced at least five entry points, out of 13, between China and Russia to be closed, as it hit far eastern Russia in regions surrounding the Heilongjiang River, according to Chinanews.

Translated by John Wang. Written in English by Stephen Gregory.