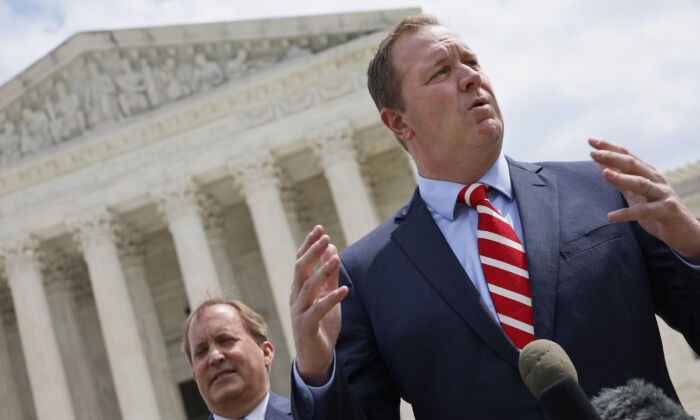 Surveys in Missouri schools that collect information from students and create a perceived need for a so-called social-emotional learning curriculum have drawn the attention of state officials.

“Those same groups come in and sell that curriculum to the schools,” said Kimberly Hermann, general counsel with Southeastern Legal Foundation, a national nonprofit law firm that defends liberty.

“The contracts with these companies are public record, so they’re supposed to be approved during school board meetings, but the surveys are happening without parental consent and parental notification.”

In response, Schmitt has opened an investigation into the use of student surveys in Mehlville, Webster Groves, Jefferson City, Lee’s Summit R-7, Park Hill, Springfield, and Neosho schools—with an eye on violations of Missouri’s Family Educational Rights and Privacy Act, or the Protection of Pupil Rights Amendment.

“Subjecting students to personal, invasive surveys created by third-party consultants, potentially without parents’ consent, is ridiculous and does nothing to further our children’s education,” Schmitt said in a statement.

Hermann details in a May 1 letter to Schmitt that Webster Groves requires middle school students to take a survey on “LGBTQIA+ Struggles!” that asks: “What are your preferred pronouns, what struggles have you experienced related to LGBTQIA+, and what would you like to see in the school in order to be more inclusive?”

“There are federal statutes that they’re not supposed to ask these questions,” said Andy Wells, the Missouri chapter president of No Left Turn in Education, a national education advocacy organization.

“The problem is that school districts, and some of the companies that are being hired by school districts, don’t care. They just ignore it. They do it anyway and if somebody doesn’t like it, you’ll have to sue them.”

Second-graders were asked, “When is the first time you noticed that people can be different races from you, what did you notice, and do you feel more comfortable around people who look like you?”

“The goal here is to teach these kids that America is a white country of white supremacy and to destroy the nuclear family,” Hermann said. “If bad actors in the progressive left are not stopped, then we’re just going to have a further divide in this country among our kids.”

Neither Panorama nor Project Wayfinder responded by press time to requests by The Epoch Times for comment.

Schools often create partnerships with third-party vendors to secure grant money, according to Jill Carter, a candidate for the Missouri Senate’s 32nd District, and by accepting the grant, they are bound to allow the surveying.

“If it’s a platform that’s providing software or technology, especially with the technology in our school’s increasing, there’s less and less ability for the school to even really know what is being asked,” Carter told The Epoch Times.

“They are giving over that oversight, and the teachers sometimes don’t even know, because the kids are online or on a tablet, and that’s part of the software or implementation of some of these programs.”

Among the concerns identified is confidentiality.

“There’s a lot of danger by it,” Wells told The Epoch Times. “The biggest of which is who has access to the data and whether it follows students to college. How is the data being used?”

Another anxiety is whether the information gleaned is creating a profile that flags a need for intervention.

“It’s definitely a force of government and the intervention would be, ‘If we don’t like the way you respond on these surveys, we’re going to recommend intervention,’ and Panorama offers intervention activities and questions,” said Missouri-based Mary Byrne, who holds a doctorate in education from Teacher’s College in Manhattan.

“There’s a menu that you can access for teachers to implement different activities.”

The use of surveys isn’t new, according to Byrne.

“It was done years before, and that’s why the Pupil Privacy Act was put in place,” she said.

The Pupil Privacy Act, also known as the Protection of Pupil Rights Amendment of 1978, prohibits children from participating in surveys and other analyses without parental consent and includes a provision for parents to opt their child out of such evaluations.

But there is no cause of action to file a lawsuit for a violation of federal privacy laws.

“The way Congress wrote the law is you can file an administrative complaint, but under the Biden administration, we know that’s not going anywhere,” Hermann said.

The subpoenas delivered by Schmitt demand documents and information to determine the extent of the surveys and whether parents consented to the surveys prior to distribution to students.

“We’d like him to obtain information regarding where these surveys are coming from and enforce federal and state privacy laws,” Hermann said.

“He has numerous different avenues that he could go based on the law and his investigatory power. So we’re going to leave it to his office to make determinations about what they think the best avenue is.”